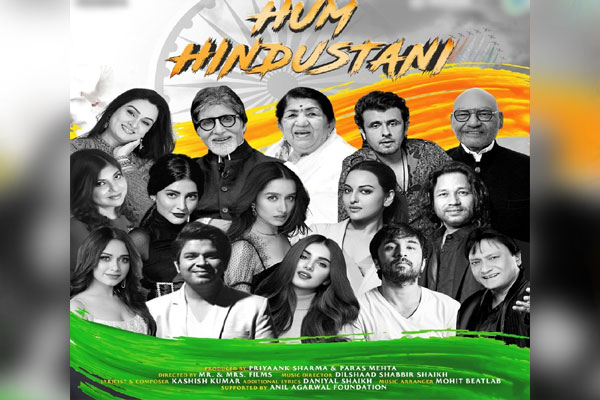 Mumbai: ‘Hum Hindustani’ will witness 15 Bollywood personalities coming together to lend their voices for the first time for a patriotic soundtrack.

The song is produced by Priyaank Sharma and Paras Mehta for their music label Dhamaka Records.

Talking about the coming together of the stars, Priyaank Sharma said: “The legendary actors and singers who have come together for the first time in this anthem will surely resonate with all and sundry in our emotions for the country and the world as a whole, uniting and spreading love and hope.”

The song is supported by Anil Agarwal foundation of the Vedanta Group. The song is directed by Mr. & Mrs. Films, music direction is given by Dilshaad Shabbir Shaikh along with lyricist and composer Kashish Kumar.

‘Hum Hindustani’ will release on August 13.

Medal for Excellence in Investigation awarded to four Odisha cops

From Madhubala to SRK and Aamir, Lata Mangeshkar’s…