18 labourers from Odisha stranded in Dubai, seek help for rescue 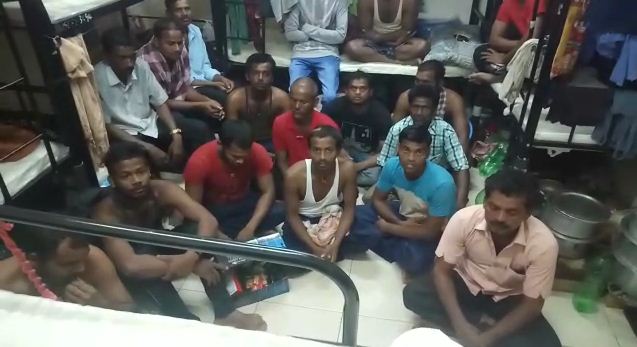 Bhubaneswar: As many as 18 labourers from Odisha were stranded in Dubai and sought help for safe return to their natives.

All the labourers are from Khallikote block of Ganjam district. They appealed to the Government of India as well as Odisha Chief Minister Naveen Patnaik for rescue from net of an agent, who had taken them to Dubai on the pretext of providing them jobs with good package.

Tragic! Two stranded labourers die while returning to Odisha from Hyderabad on bicycle

In a video message to media, the victims shared their nightmare after they reached Dubai with help of an agent namely Kartik Jena from Odisha.

According to reports, 18 labourers had migrated to work with a Dubai unit of Chennai-based import oriented company. However, they were exploited and not paid for the past four months.

They complained of harassment by both the company and agent for asking for the payment.

“Agent Kartik Jena, a resident of Manikpur area of Ganjam district, had escorted us to Dubai alluring with high package. He had told us to provide 900 AED as basic salary and 200 AED for fooding. After reaching Dubai, he promised us to pay 5 AED per hour. However, we are not getting work every month and the agent is forcing us to work even we suffer from illness,” one of the victims said in the video.

They said that they are spending their days without food as they have no money.

“We are not paid for past 4 months. When asked about payment, the agent used to thrash us and drive us out of room,” he said.

Through the video, the stranded labourers sought intervention of the Centre as well as the state government to initiate the process for safe return from Dubai to Odisha.