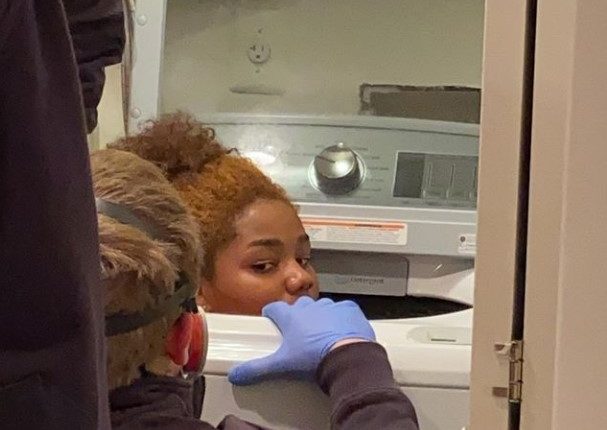 Virginia: Firefighters had to be called in after a teenage girl who was playing hide and seek with her cousins got stuck in a washing machine on Sunday.

The 18-year-old girl, identified as Amari Dancy who was playing the game with her younger cousins and after hiding in all usual places she decided to squeeze herself into the washing machine. But when one of her cousins found her in the appliance and informed elders who then called up the fire crew for help.

In a video, a team of firefighters wearing masks from Prince William County Fire and Rescue in Virginia came to the girl’s rescue and pulled her out safely from the machine. They removed the top of the machine and made enough space to pull the girl out.

The entire incident was captured on camera by the girl’s aunt who was heard saying, ”Kids will be kids.

“I was really worried to see if they were going to get me out or not. Once they figured out what to do. I just felt relieved, I just wanted to be out of there. I mean its pretty embarrassing , but all I can do is laugh it off, my family had a laugh out of it,” Dancy said.

Tips for protecting eyes while working from home on computer