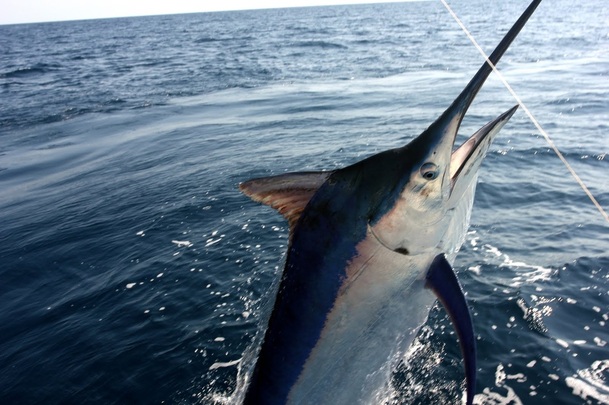 Dhamra: In a rare occurrence, a 185 kg Black Marlin fish, usually found in the Pacific ocean, was caught near the shores of the Bay of Bengal in Dhamra of Odisha.

A fisheries expert on Thursday traced the cause to the migration of fish to various places in search of food due to global warming.

“Marlin fishes are usually found in the colder region and surprisingly it was found in the Bay of Bengal,” said Ramkrishna Sardar, Additional Director of Fisheries (Marine), East Midnapore district.

According to him, the Marlin was caught by a fisherman in Dhamra of Odisha. On Tuesday, he sold the 11-f00t-long fish in the sea resort of Digha in West Bengal for Rs 8,500.

“Owing to the above qualities, the fish is quite popular in the United States and is a part of a sports activity where people try catching it,” he added.

Marlins have a long, sword-like upper jaw which is used to slash and stun fish, making them easier to catch. They are close relatives of the swordfish.

A migratory species, it travels hundreds or even thousands of miles in warm currents. (IANS)