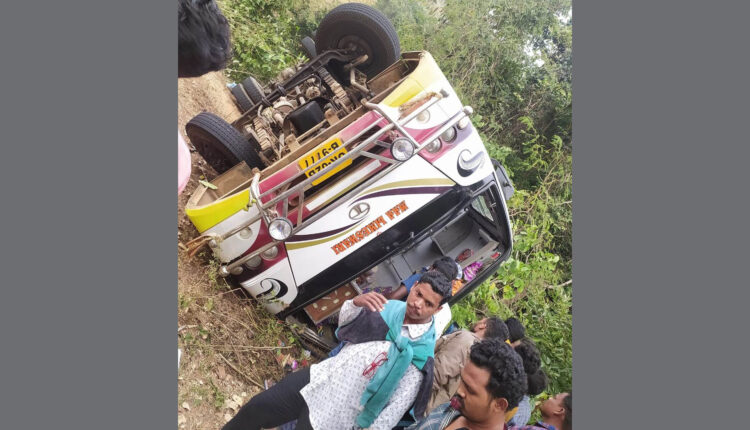 Ganjam: At least two passengers died and 20 others sustained injuries when a minibus overturned at Baniabasa Mankadadian under Jarada police limits in Ganjam district of Odisha today.

The incident took place at around 4 pm when the minibus (bearing no. OR-02B B-9777) with around 30 passengers was on its way from Raygarh in Gajapati district to Buratal near Patrapur in Ganjam, sources said.

The bus overturned when the driver lost control over the vehicle, they added.

The deceased have been identified as Saraswati Sabar (16) of Shikulipadar and Sumati Rait (28) of Arakhapada, sources said.

“Two passengers died in the mishap while several others sustained injuries. The injured have been rushed to Patrapur Community Health Centre (CHC) in three ambulances and several other vehicles. Steps are being taken to shift the critically-injured persons to MKCG Medical College and Hospital in Berhampur,” said Patrapur BDO Prakash Chandra Das.

The police are looking into the exact reason behind the mishap, he added.

Odisha’s Aska Police Station felicitated as the best in India