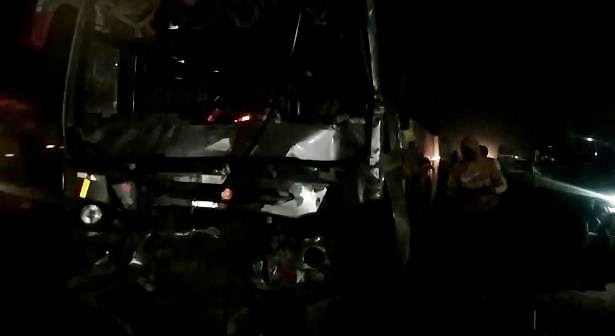 Bhadrak: At least two persons died and 25 others sustained injuries as a bus carrying 52 pilgrims from Uttar Pradesh hit a truck on NH-16 near Barikpur in Odisha’s Bhadrak district in the wee hours of Wednesday.

According to reports, the pilgrims, hailing from Gorakhpur area of Uttar Pradesh, were heading towards Puri in the ill-fated vehicle. The bus rammed into a stationary paddy-laden truck parked on roadside killing the two and injuring others.

Fire Service personnel rescued the victims and rushed them to the Bhadrak District Headquarters Hospital. Condition of 15 of them was stated to be critical.

In another road mishap in the district, an ambulance hit another ambulance from rear on NH-16 near Dahanigadia leaving four persons, including two patients, critically injured. The victims were initially admitted to the District Headquarters Hospital while two of them were later shifted to the SCB Medical College and Hospital in Cuttack as their condition deteriorated.

The two patients of Kolkata were being taken to Cuttack in the ambulances when the accident took place, reports said.