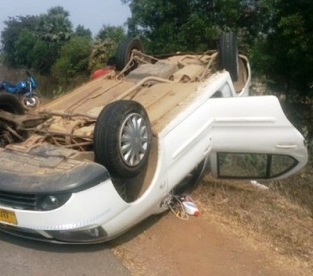 Two persons were killed and 4 others sustained critical injuries in separate road mishaps in Odisha today.

A youth died and his friend was grievously injured when a bike on which they were travelling and a pickup van collided head-on at Pateli village under Chandanpur police limits in Puri district today.

The deceased was identified as Balinkicharan Swain (22) of Pateli village. His friend Kusuni Panda (24), who was injured in the accident, has been admitted to hospital in a critical condition.

On the other hand, a car overturned on NH-5 at Talanagar under Soro police limits in Balasore district today killing one and injuring three others.

The deceased was identified as Krushna Chandra Sethy. The victims have been admitted to Soro community health centre (CHC).

The car turned turtle due to mechanical failure, reports said.