2 killed as roof of residential building collapses in Gurugram 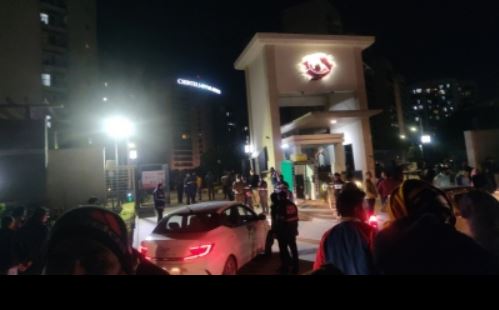 Gurugram: Two persons were killed and at least 6 others injured here on Thursday after a portion of an under-construction roof on the sixth floor of a residential building collapsed, officials said.

An official said that an under-construction roof on the sixth floor at Chintels Paradiso in Sector 109 collapsed, and the impact was so severe that it went on to damage all the roofs till the first floor, causing casualties.

Commissioner of Gurugram police, fire officials and teams of civil defence, SDRF and NDRF have arrived on the spot.

Several people are said to be trapped in the debris. The rescue teams have started clearing the debris to rescue them.

“The number of people trapped in the building’s debris is yet to be ascertained but we suspect that around 5-6 could be trapped,” Gulshan Kalra, Deputy Director Fire Department, told IANS.

Chintels Paradiso has a total of 530 flats and over 400 families reside there.

The Fire Brigade, ambulances and police personnel were present on the spot.

In a statement, Chintels Paradiso said: “This is an extremely unfortunate incident and we have taken it very seriously as the safety of our residents is our utmost concern. Upon preliminary investigations, we have come to know that some negligence in repair work done by the contractor in an apartment led to this incident. We are fully cooperating with the authorities and ensuring all support. We extend our heartfelt condolence to the affected families.”