20 years on, Odisha woman struggles for justice against father’s killers 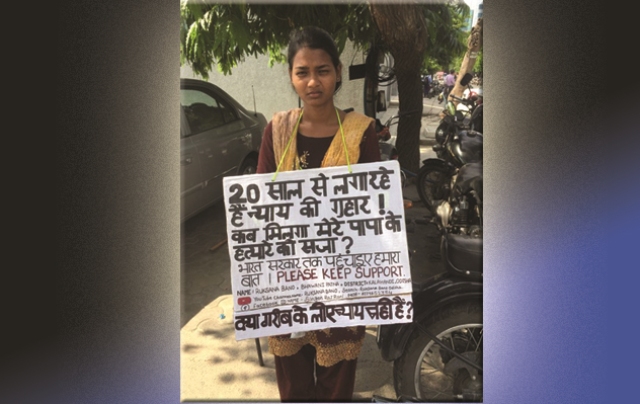 Bhubaneswar: Justice is a lengthy process and seeking for it, a woman in Odisha has been struggling for 20 years to see her father’s killers to get punishment.

Being disappointed by the existing system of law and ‘lengthy’ administrative procedures, Rukhsana Bano, a woman from minority community of Bhawanipatna area in Kalahandi district, is on dharna in Delhi demanding strong punishment for her father Abdul Habib’s assassins.

Along with her mother, she has been staging dharna at various places in national capital in past eight months and appealing to the Prime Minister Narendra Modi seeking action against accused persons involved in her father’s murder.

According to reports, Rukshana’s parents had a love marriage. After few years of marriage, Abdul Habib, father of three children, died in 1999.

Rukshana alleged that her father was poisoned to death by his siblings over property dispute. When her mother protested seeking justice, she received murder threat from the accused persons.

“The tragedy took place when I was just one and half year old, my elder sister was only 3 and my youngest brother was aged about only 2 months, who is now mentally ill. Under extreme conditions, my family survived and struggled to get justice for my father. It has been already 20 years we have been fighting for justice,” said Rukshana.

The courageous daughter had approached the district collector, SP, DSP and IIC between the years 2012 and 2019, but her voice was unheard. On directive by the collector, the SP reopened the case and booked the accused persons under sections 302, 506 and 34 of IPC, but nobody was called for interrogation in the case.

“As we did not get justice in Odisha, we had to come to Delhi. After sitting on dharna for 62 days, a CBI probe was ordered into the case. But, Bhawanipatna SP closed the case and forwarded the copy to the CBI. With no option left, we have been begging here for justice in past eight months,” she said.

Meanwhile, various voluntary organisations have extended helping hands to provide them food and other facilities during her stay in Delhi. Under adverse situation, Rukshana and her mother are still hopeful to get justice.