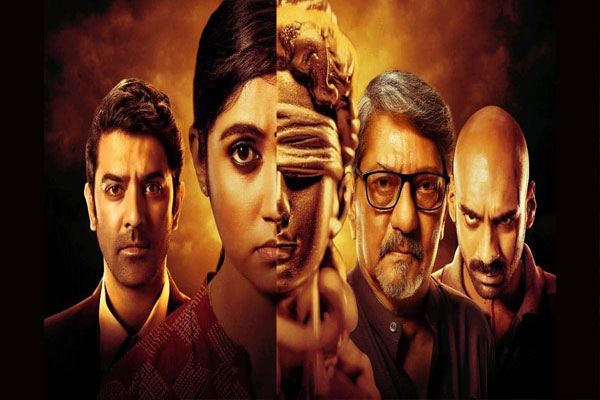 Bhubaneswar/Mumbai: Every success story is worth celebrating and so is the journey of achieving it. But, amidst the shimmer and glitter of all good things, we often skip on acknowledging all the hard work and determination that finally pave the way. Sambad English caught up with Odisha-born storyteller Abhijeet Das who is under spotlight for his debut film ‘200 -Halla Ho’.

In a tete-a-tete with Abhijeet, we take you through his journey from an ordinary Bhubaneswar boy to a reality director in the Hindi Television industry and now, founder and director of a Mumbai-based video production company ‘Film Jungle Entertainment’ whose first release ‘200 -Halla Ho’ has garnered immense audience appreciation.

Here are excerpts from the interview:

Tell us about your journey from Bhubaneswar to Mumbai.

I graduated in B. Com from Ravenshaw University in 2008. Then I moved to Mumbai for opportunities where I did a course in advertising. My first job was with Red Chillies Entertainment. I did Television for the next 10 years during which I worked as a reality director for shows like MTV Roadies, Splitsvilla and Indian Idol. Working for the television gave me exposure to many real stories and after gaining work experience, I thought about setting up my own production house. So, I teamed up with two of my friends Soumyajit Roy and Nandan Deb to form ‘Film Jungle Entertainment’.

After a long find, we found this story.  It was stuck with the public for 15 years but nobody talked about it. So, we did research on it which gave us an idea that probably a gang war was concluded then but a facade was made using these women.

We went to the lanes of Kasturba Nagar, Nagpur, the real place that suffered under the tyranny of Akku Yadav for 10 long years. There, we met Usha Narayane, the woman who stood up against this tyrant for the first time. We got a clear image of the dark truth hidden behind the closed curtains of the Dalit bastis and that is precisely what we tried to narrate through this film.  Satyabrata Das (a senior Mumbai-based media professional), who happens to be my uncle, helped us pitch our story to Zee5 amid the mighty Covid lockdown. It took us two years apart from making the film… but long story short, the film was made with care and sensibilities and I hope it has rung the right bells. It’s important for us to be aware and vocal about the inequalities around us.

Being a native of Odisha, why did you choose to make a Maharashtra-based incident your first story?

The idea is not about Maharashtra but about the people that belong to the backward class and the system that doesn’t listen to them sometimes. I was born and brought up in Bhubaneswar and whatever I am today; I owe it to my city. But I grew up in a house governed by my mother and grandmother; basically the women in the family. However, in all those years, I had seen the patriarchy that was so deep rooted in the society; although not inside my house. I was a DAV student and many of the friends I had then were from underprivileged backgrounds and their family backdrop was very similar to the story we wrote.

After moving to Mumbai, I lived in Vasai for quite some time and I have very closely seen the lives of people from the Dalit communities there, the baggage they carried. Honestly, I felt for those people, those women. I carry a part of Maharashtra in me after all these years now.

What was your idea behind telling this particular story?

When the society doesn’t respect your presence, the system fails you  thoroughly, and your family is scared to stand by you, what do you do! We wrote what those women did. There was also another concerning angle that we tried to portray if the citizens in our country are safe even inside the court rooms. Around 200 women just barged into a court room, hacked a criminal to death who was produced before court and walked away. Could this justify a mob lynching someday!  Basically, the idea behind writing this story was not entertaining rather, cautioning the society.

Your movie was listed among eight must-watch movies, series and documentaries by Vogue magazine. How does that make you feel?

It is quite special. While writing the story for the film, we just wanted it to reach to the people. We had never imagined at that point of time that Vogue would eventually write about us. When we started writing, there was a rage inside of us which shaped into something quite impactful. Then we thought why we would want to seed anguish in the minds of our viewers about that fateful incident after all these years. Instead, we shall give them a message, a cautionary one. So, this movie was our attempt to give a message to the society in a very polite manner.

The movie’s star cast included celebrated actors like Amol Palekar. What was your experience working with them?

It was a big learning process. We were the creators of the film. There were huge possibilities where people could tamper with things and many things could have gone wrong. But, I’ll be honest, they have done an amazing job. What we had in mind while writing the film, it was exactly portrayed by them.

We finished the shoot in 35-40 days. All the four actors in the pivotal role- Amol Palekar, Rinku Rajguru, Barun Sobti and Sahil Khattar, did an amazing job. It was a heavy concept and every actor has given a part of themselves to this film. In fact, Sahil Khattar, who played the anti-hero, is an utterly fun-loving guy in real life. But he himself was shocked at the kind of performance he had given in the film.

After the phenomenal success of ‘200 Halla Ho’, what would be your next project?

I am delighted to share that our next film is about Odia Merchant Navy officer Supid Choudhury.

He was kidnapped by Nigerian pirates along with four other Indian merchant Navy officers back in 2019 when Odisha was devastated by cyclone Fani.  He along with the rest officers, struggled in the pirates’ captivity for around 70 days while their families were suffering here in the cyclone-hit Odisha. The story would narrate what torture they endured and how they eventually managed to return. It’s a complete escape thriller.

You have worked under some big banners like Red Chillies Entertainment and BBC News India. How different does the work seem now that you have your own video production company?

In those 10 years of working for all the big production companies, I realized I was working for someone else’s dreams. I believe one should do a job for a certain point of time, earn, make savings and gain experience and then leave it and build something of their own. That’s what I did.

I have a perspective, a point that I want to make and with my own production company, I would have the means and freedom to do that. My production company is my baby… I am nurturing it… and look…I am giving interviews, something I had only watched celebrities doing. After all said and done, I am a simple, middle-class Odia guy and for me, little things matter. So, it’s amazing.

Honestly, I have never got a chance to watch any Odia movies. I was always familiar with Odia music though. However, my father is a huge fan of Uttam Mohanty.

Which filmmaker or storyteller do you take inspiration from?

I listen to a lot of stories and people’s way of narrating them have helped shape me as a storyteller too. Many a times we mull on stories that are massy. I really want to tell stories that have not been told in a certain way. I will continue to talk about the harsh realities, be it women’s safety or patriarchy or inequality but I’ll do that in a different way.

What would be your message to all the aspiring writers and storytellers out there and to those parents who don’t quite encourage their kids to pursue careers in creative field?

To the young boys and girls, I would say, if you are serious about your dreams, complete your education and then venture out, take risks and fight for what you believe in. And to the parents, I would say, help your kids get the right education that would help them achieve what they really want. If they are aspiring to pursue a career in the creative field, don’t force them into MBA or commerce or science, enrol them in Fine Arts. Also, journalists and media persons should write more about people who are excelling in this field instead solely portraying the downsides of the media.

So far, Odisha is known for Puri Shri Jagannath Temple and the natural calamities. Let it be known for its people’s success stories in various fields including creative arts.