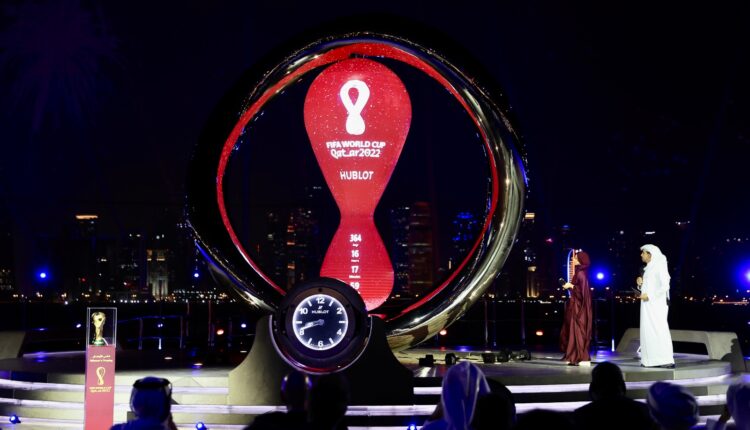 Doha: The 2022 Qatar World Cup marked one year to go to the big kick-off of the football extravaganza as it unveiled the official Countdown Clock at Doha’s Corniche Fishing spot on Sunday evening.

The curves of the Countdown Clock were inspired by the unbroken loop of the FIFA World Cup Qatar 2022 emblem and the ancient timekeeping tool of the hourglass, both reflecting the interconnected nature of the event. The structure is designed to be seen from any angle and reflect the view of the city skyline behind it, Xinhua reports. FIFA president Gianni Infantino said, “I’ve been involved in the organisation of sports events for the past few decades, I’ve never witnessed anything like what is happening here. Everything is ready, the venues will be fantastic. The experience for the fans will be great.

“The world will discover a country and a whole region. Qatar, the Gulf region, the Middle East, the Arab world. A place where people meet and come together. This is what football is all about, this is about what this part of the world and its culture is all about, and the world will realise that.”

Speaking at the event, H.E. Hassan Al Thawadi, Secretary-General of the Supreme Committee for Delivery & Legacy, said, “We are thrilled to unveil the Official Countdown Clock on the same day we come together to celebrate the one year to go milestone.”

“The unveiling of the Countdown Clock is a special moment for Qatar as a host country, as we enter the final straight on the way to delivering a transformative tournament with a lasting legacy — the first FIFA World Cup in the Middle East and Arab world,” he added.

The Qatar World Cup will take place from November 21 to December 18 in eight stadiums across Qatar and the main contractor works on Lusail Stadium, the 80,000-capacity venue for next year’s final have been completed.

Python travels with passengers in bus in Rajasthan’s…