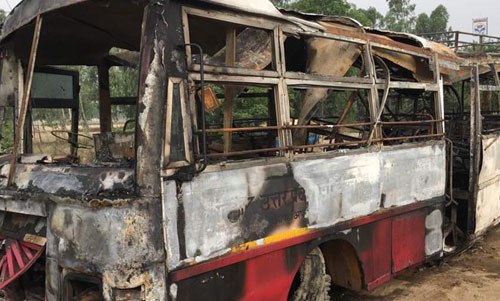 At least 22 persons on Monday were charred to death in Uttar Pradesh after their bus caught fire following a massive collision with a truck on a national highway in Bareilly, police said.

The accident occurred at around 2.30 a.m. near the inverted University turn when the bus from New Delhi heading towards Gonda collided head on with a speeding truck coming from the direction of Lucknow.

An explosion followed and fire broke out in the bus. A district official told IANS that the truck driver has escaped. The police were looking for him.

Police officials said the death toll could rise as most of the passengers were severely burnt.

Fire tenders were rushed to the accident site.

Some injured were rushed to nearby medical facilities. Condition of most of them is stated to be critical.

The traffic has been diverted and now efforts were underway to extract the charred remains of the passengers. (IANS)