Bhubaneswar: As many as 22 doctors in Odisha have been martyred in battle against deadly COVID-19 in second wave.

So far, the virus has claimed total 594 doctors’ lives in its second wave in the country.

A list released by the Indian Medical Association (IMA) revealed it on Tuesday.

As per the list of state-wise doctors martyred in second wave of the pandemic, Delhi registered the highest number of deaths with 107 followed by Bihar (96) and Uttar Pradesh (67).

The State-wise data shows that Rajasthan accounted for 43 deaths, Jharkhand-39, Telangana and Andhra Pradesh-32 each, Gujarat-31 and West Bengal-25.

Total, nearly 1,300 doctors have died on the line of duty in battle against COVID-19 in India since the pandemic began last year.

Here’s the State-wise list of doctors died in COVID-19 second wave so far: 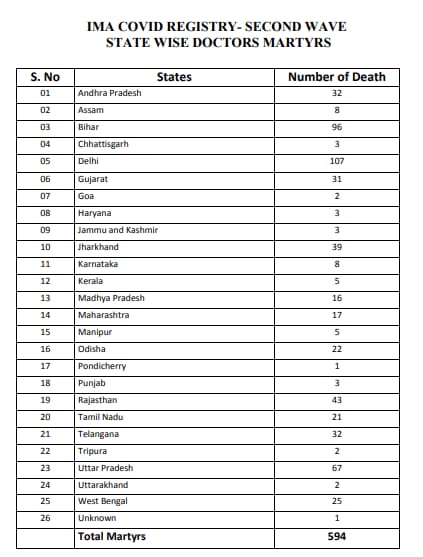