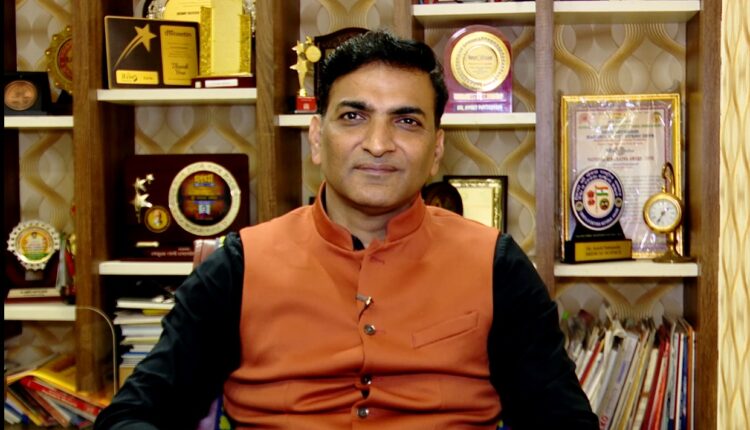 Bhubaneswar: Renowned Psychiatrist in Odisha, Dr. Amrit Pattojoshi has played a pivotal role in improving the mental health and well-being of thousands of patients facing mental challenges. In an exclusive interview with Swasthya Sambad, Dr Amrit extensively talked about the rise of suicide cases in Odisha and how to deal with this alarming situation. Excerpts:

There has been almost 23% rise in suicide cases in the last two years. Causes of suicide involve multiple factors. Basically, COVID has been one of the major reasons. The fear of the illness, loneliness, isolation etc is some of the primary reasons. Post COVID, people became isolated, depressed, anxious, lost their near ones, loved ones, loss of jobs, unemployment issues, and financial issues etc. People were not connected in the real sense. People were virtually connected. Sense of connectedness was absent. The social support systems faltered. Everybody was on the edge. Eventually when people started staying at home, they started misusing and over-using the internet. They were always connected but virtually. They were always on the mobile. So somewhere the aggressive instincts came out that led to change in lifestyle. People were not going out, people started ignoring exercise and diet was indeed a matter of concern.

Finally, when stress levels increased, people got inclined towards alcohol, smoking and maybe into drugs. And what this whole thing did is it increased their aggressiveness. So agressiveness is not always towards others. Sometimes the aggressiveness becomes inwards also. So once you are into substance, your brake systems in the brain do not work effectively and efficiently.

Hypothetically if I have suicidal thoughts, I feel hopeless, I should die. So the whole brain tells me no. There are a lot of good things in life. You have a father, you have a mother, you have a daughter, your friends, you have work, your patience, lot of things. But once you are under the influence, once you are depressed, once you’re anxious, the brake systems don’t work.

Some people act on these thoughts. And unfortunately, many young people end up losing their lives. And now we see another trend. A lot of old people also are committing suicide. One of the most important aspects is what keeps us alive is love. Love keeps us alive. So what happens is this young generation we see have a lot of relationship issues. They are not able to form relationships. They feel that virtually if somebody tells ‘I love you’, it means that somebody loves me. I can sit down in my clinic and say I love you. I want you. I miss you for 100 people. But when in the real sense we meet together, then how much care, how much love, how much adjustment I’m able to make? How am I going to adapt to keep somebody in my life is very important.

So that’s why I tell the people please invest in multiple relationships. Maintain relationship with parents,  have a friend circle and when you are in a romantic relationship have one person to whom you are loyal, whom you are good, whom you are true and if something anywhere goes wrong, the other support systems help you. That’s what was happening in joint families, in societies where people were together, pujas were done together. People used to go to picnics together.

So we need to change the way we live life. Time to change the way we cope with failures, time we looked at only at efforts, not just results. Because if you put in efforts, consistent results will come out regularly. Let’s be good to each other. Let us be true to each other. Let us be good friends. Let us be true enemies also. Let us not be jealous because everybody has good days and bad days and only when we look to help others on their bad day, then only somebody will help us on our bad day.

Odisha ranks 12th in terms of number of students but 3rd as far as students’ suicide is concerned. Around 1429 students died by suicide in the year 2020. What could be the most probable reasons?

It is indeed alarming because I feel that Odisha is a very peace loving place. We don’t have too much of caste, community or language discrimination in the state. It’s a society which has accepted everybody with open hands. There’s no place in the country which can be so impartial. I think in Odisha, if you look at schools, colleges, nobody is partial to it. Everybody is treated equally. And in this place, if the number of suicides is so high, it’s actually a sad event. The whole thought processes, the whole education system, the way parents deal with kids, the way teachers deal with kids, how we deal with bullying, how we deal with sexual abuse those things, those traumas actually make somebody more vulnerable. Every time there will be stress, but somebody comes out stronger, somebody comes out weaker. And somebody does not come out of it at all. He succumbs. So that’s where we need to look deep. These systems have to change the systems in place. I always tell one plus one is never two in suicide. There are a lot of factors which make somebody do something. Suicide is not murder. So every time if we want to stigmatize, if you want to suicide victim, we always play the victim card. He has been victimized like this. Or we want to make them a hero, then the rise of suicide will be there. The more you talk about how they have done suicide, the ways they’ve done the methods used, the suicide note, repeatedly running the stories, making them front page stories, making them headlines, there’s a term known as suicide contagion. People who are on the brink will start thinking suicide is an option, which we don’t want. Suicide is not an option.

Can you briefly explain the impact of COVID-19 on mental health?

People started living alone, people were not able to connect, lot of people lost their new ones, a lot of people were under the anxiety of having the COVID, we could not meet each other, we could not connect to people, we could not see people. People living in apartments were absolutely isolated. Everything you do, you are always thinking that if I have COVID and I transmit to my mother, father, sister, daughter, what will happen? People became depressed, no social gathering, no meeting of people, nothing to release our stress. Every day the news was only death, death, death, darkness. So what will happen? You naturally will go down and down. So there was a lot of post traumatic stress disorder. People were not able to sleep, they started abusing alcohol, cannabis, sleeping pills.

We did a study on domestic violence. In some areas, domestic violence increased exponentially, because people are not able to go out and vent their anger and all. So the whole thing was directed towards their partners. Then kids could not go out to play, couples could not go out. People lost their jobs. People had to take pay cuts. Look at what happened to the hotel industry. Nobody went to hotels. They lost their jobs. People had to pay rents where they were not earning. So nowhere was there any compromise. People who are in superior positions never made the compromise. So I saw a lot of my known people migrating to villages. Now a lot of migrations occur. A lot of people came back. People had no money. Education took a toll. Teachers had to compromise.

Everything was stressed beyond a point and somewhere so the depression, anxiety, post traumatic stress disorder, substance abuse, everything was exponentially high.

What is the best way to manage stress and what should an individual practice on a daily basis to have a good mental health?

Parents need to change the way they look at the children. They should not always be competing that my son is getting this. You have to identify the strengths in your kid and allow those things to develop. You cannot tell a singer to go and dance. You cannot tell a long jumper to make high jump. These are all two different domains. You cannot compare apples with oranges. Secondly, the teachers will have to stop comparing. The teachers have to understand why one kid is little less dressed and why one is better dressed. You cannot tell that everybody is equal. Equality is based on requirements. Let us not compare that. Bullying has to be taken seriously in schools. Sexual abuse has to be taken care of. The whole system should be for overall development of an individual i.e. physical strength, emotional strength, coping skills, happiness.

So exercises, good diet, the way we handle failures, accepting failures, being in a society, helping each other, networking, building relationships, trying to keep them intact, respecting people, being non judgmental. I think those things are very important aspects which we need to develop if we need to have good mental strength.