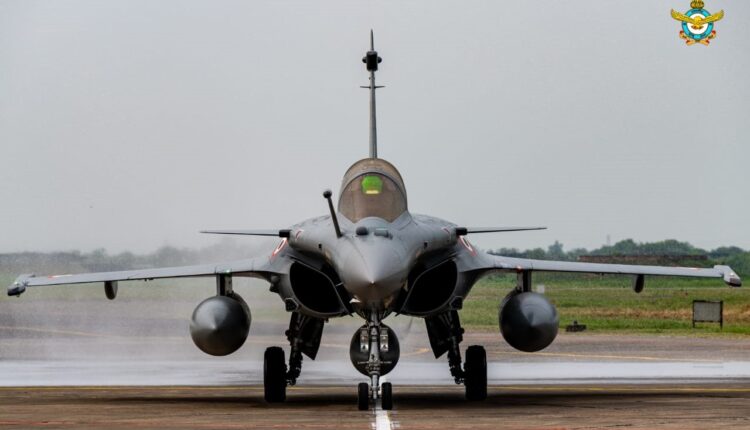 New Delhi: The Rafale jets, known globally as one the most potent strategic platforms with unmatched capability in carrying out a variety of roles, will significantly bolster India’s air combat capabilities when it is facing hostile neighbours like Pakistan and China, defence experts said on Wednesday.

The timing of induction of the 4.5 generation combat jets assumed significance as it came in the midst of India’s tense border row with China, they said.

Why is PM Modi silent after new revelations on Rafale deal: Congress

They said the Rafales could be a game-changer for India after all the 36 jets join the Indian Air Force as no aircraft in possession of any country in the neighbourhood will be able to match their superior kinematic performance and powerful electronic warfare systems.

The Rafale jet, which is often compared with the US’ stealth F-35 aircraft and F-22, is able to carry out all combat aviation missions like air superiority and air defence, close air support, in-depth strikes, reconnaissance, anti-ship strikes and nuclear deterrence at varied speed limits of up to 1.8 Mach.

The aircraft proved its unmatched capabilities in air combat missions in Afghanistan, Libya, Mali, Iraq and Syria in the last few years. India is the fourth country to have the strategic platform after France, Egypt and Qatar.

According to Dassault Aviation, the aircraft has a whopping 30,000 flight hours in operations.

In comparison to F-35, experts said the Rafale jet is more agile as it has long-endurance to fly at a higher speed while carrying a range of weapons for a longer period of time. However, the F-35 scores much ahead of Rafales in terms of on board avionics and electronic warfare systems.

“It is one of the finest combat aircraft available in the global market. It is much more advanced and lethal than the current fighter aircraft available with China. It is definitely a boost to India’s defence preparedness. The timing of the arrival of the jets is perfect,” said defence expert De Laxman Behera.

When asked about China’s fighter jet J-20, he said it cannot be compared with Rafale as the French manufactured jet is much more potent than the Chinese aircraft.

“There was no comparison between Rafale and the J-20s. The world does not know about the J-20s. The Rafale jets will give the IAF superior air dominance capability,” the former IAF chief told PTI.

European missile maker MBDA’s Meteor beyond visual range air-to-air missile, Scalp cruise missile and MICA weapons system will be the mainstay of the weapons package of the Rafale jets.

The Indian Air Force is also in the process of procuring a new generation medium-range modular air-to-ground weapon system Hammer to integrate with the Rafale jets.

The Hammer (Highly Agile Modular Munition Extended Range) is a precision-guided missile developed by French defence major Safran. The missile was originally designed and manufactured for the French Air Force and Navy.

“India will have unmatched air power in the region when it has all the 36 Rafale aircraft. It will be a game-changer for India” said Dr Behera, who is a leading expert at the Manohar Parrikar Institute for Defence Studies and Analyses.

He said both Pakistan and China must have taken note of induction of the fighter jets.

The government on Monday said that the delivery of all 36 aircraft will be completed by the end of 2021.

The NDA government had inked a Rs 59,000-crore deal on September 23, 2016 to procure 36 Rafale jets from French aerospace major Dassault Aviation after a nearly seven-year exercise to procure 126 Medium Multi-Role Combat Aircraft (MMRCA) for the Indian Air Force did not fructify during the UPA regime.

The emergency acquisition was made primarily to check the depleting combat capability of the IAF as the number of its fighter squadrons had come down to a worrying 31 against the authorised strength of at least 42.

The fleet, comprising three single-seater and two twin-seater aircraft, is being inducted into the IAF as part of its Ambala-based No 17 Squadron, also known as the  ‘Golden Arrows’.