4 killed, 32 injured as bus falls off bridge in Odisha’s Sambalpur 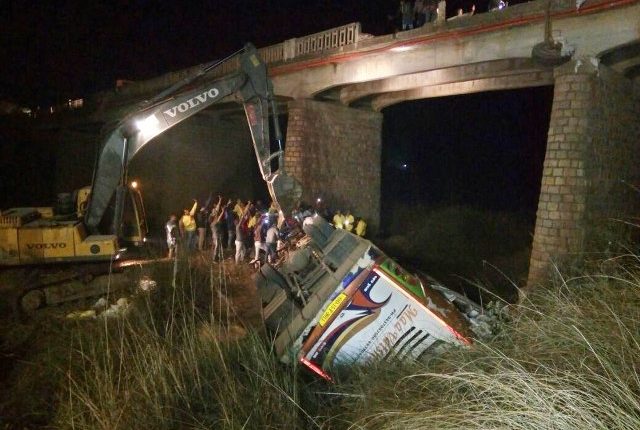 Sambalpur: A moving bus fell off a bridge near Padiabahal in Odisha’s Sambalpur district last night killing at least four persons and injuring 32 others.

According to reports, the mishap took place around 11 pm when the driver of the ill-fated bus, namely ‘Maa Vaishnodevi’, lost control over the wheels following which the vehicle fell off Malati Jora bridge. The bus was on the way to Rairangpur from Sambalpur.

Locals, police and fire personnel rescued the victims. The injured ones have have been to Sambalpur District Headquarters Hospital (DHH) and Veer Surendra Sai Institute of Medical Sciences and Research (VIMSAR), Burla. The condition of several victims is stated to be critical.

The deceased have been identified as Ranjan Meher from Bijepur, Gopalchandra Mahant from Keonjhar, Saroj Routray from Puri and Dilip Sahu from Keonjhar.

Meanwhile, Chief Minister Naveen Patnaik announced an ex-gratia of Rs 2 lakh each for the next of the kin of the deceased and free treatment for the injured. The CM has conveyed his deep sympathy to the bereaved families.

On the other hand, a case has been registered against the driver of the bus on the basis of preliminary investigation by police. The documents of the vehicle will be examined and it will be ascertained whether it had fitness certificate or not, police sources said.