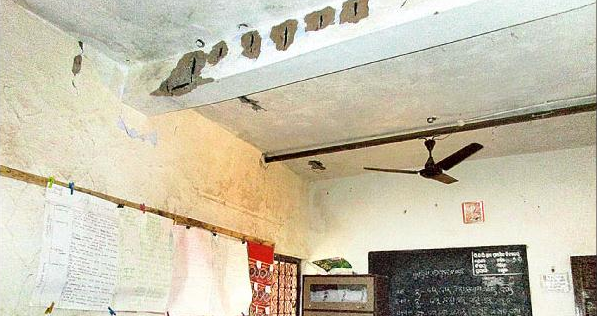 Over 2,000 schools in the state continue to run in dilapidated buildings, despite the Odisha government repeatedly sending reminders for demolition of the unsafe structures.

After the unfortunate incident in Saraswati Sishu Vidya Mandir under Satyabadi block in Puri district where a girl student died of wall collapse, more such buildings have sent alarm bells ringing for worried parents.

Earlier, the School and Mass Education Department had identified 48 such buildings in Bhubaneswar and directed for their demolition. However, only 5 of them have been demolished so far.
Around 50,000 students are enrolled in 345 different schools running under Bhubaneswar Municipal Corporation (BMC), of which 145 are primary schools while 113 are upper primary schools. According to reports, 13 of them either have their asbestos roof cracked or rain water seeping through walls, making it vulnerable to collapse at any moment. Similarly, 10 schools are running under difficult conditions where it is impossible for students to sit in the classrooms. However, the threat still looms large as students roam around them freely.
Many of these schools are situated in Old Town, Mancheswar, Nayapalli, Baramunda and GGP Colony. Even as many parents have voiced their concern over such state of buildings, question arises why such schools continue to operate risking lives of children.
Project Director of OPEPA, Mahendra Kumar Mallick, has meanwhile, said that schools have been repeatedly informed. “We have issued specific guidelines to all schools. Although some schools have complied, many are yet to take any action”, he added.
Share FacebookTwitterGoogle+WhatsAppTelegramEmail

No takers for makeshift idol immersion ponds in Odisha!