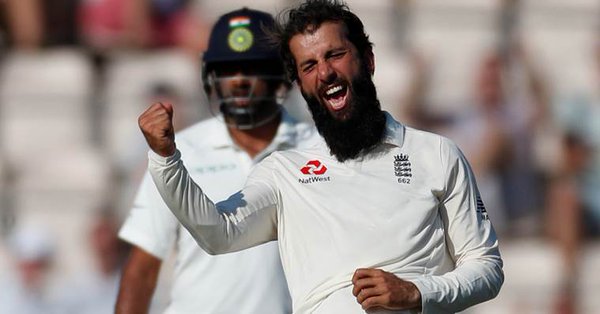 Southampton: India suffered a 60-run defeat against England in the fourth Test after being bowled out for 184 runs in their second innings on the fourth day at the Rose Bowl Cricket Stadium here on Sunday to go down 1-3 in the five-match series.

Chasing 245 runs for victory, India were driven by skipper Virat Kohli (58) and Ajinkya Rahane (51) who showed a fight against the English bowlers.

The duo were involved in a 101-run stand for the fourth wicket and had revived India’s hopes but the hosts’ bowlers came all guns blazing in the evening session to wrap up the visiting side.

The day, however, began the way India expected. Resuming the day at 260/8, England lost Sam Curran (46) and Stuart Broad (0) as the hosts could add only 11 runs in about half-an-hour on Sunday.

Broad was the first to go, as he became seamer Mohammad Shami’s fourth victim of the innings. Trying to slash a wide delivery, he only managed an edge to wicket-keeper Rishabh Pant.

Left-hander Curran hit off-spinner Ravichandran Ashwin on the leg side but his decision to take a double hurt him. Ishant Sharma made a long throw to ensure Curran fall short of the crease as England’s second innings ended at 271. With India having a 27-run first-innings lead, India needed 245 to win the match.

India’s chase was wobbly from the beginning. A delivery from experienced seamer Broad kept low before rattling the stumps of Lokesh Rahul.

Then, first-innings centurion Pujara failed to fend off an inswinging delivery from veteran seamer Anderson. The ball hit Pujara’s right thigh — an easy decision for the umpire to judge him LBW.

Dhawan was the final wicket to fall before the lunch session. An edge off a delivery from Anderson saw Ben Stokes take a very good catch at slip, as India lost their third wicket at 22.

Then, Kohli and Rahane endured some hostile bowling to take India to 46/3 at lunch. Off-spinner Moeen Ali thought he had Kohli, who was on 9. But the umpire ruled out the LBW appeal. England sought a review but the decision stood as Kohli was found to have edged the ball on to his pad.

Couple of overs later, Rahane too got a reprieve when he was batting on 12. Left-arm seamer Curran got an LBW verdict against Rahane with an away-moving ball hitting the right pad. Rahane took a review and it was later revealed that Curran had overstepped the crease.

Kohli and Rahane continued to bat sensibly to guide India past the 100-run mark in the second session. Kohli survived a close LBW decision against off-spinner Moeen Ali to lead his side’s revival.

The experienced pair dealt mostly in singles and twos to collect the runs. With England also being guarded against conceding quick runs, captain Joe Root’s fielding placements were slightly defensive. It allowed spaces to open up for Kohli and Rahane to look out for singles and twos.

For more than two hours in the session, Kohli and Rahane were in control. Kohli perished after registering his 19th half-century in Tests. A delivery from Moeen got a sharp bounce to kiss Kohli’s gloves and Alastair Cook took an easy catch at short leg in a big relief for the hosts. Kohli’s dismissal was the lone wicket to fall for India in the second session as India reached 126/4.

Afterwards, in the post-tea session, Rahane showed some resistance but lacked support from the other end as Hardik Pandya (0) and Rishabh Pant (18) fell cheaply. Pant’s audacity to go after English bowlers was the reason for his downfall as his 12-ball 18-run knock ended with an easy catch for Cook at deep cover off Moeen. Pandya edged Stokes to Root at slip.

Moeen, who had also claimed the precious wicket of Kohli, gave India another jolt as he caught Rahane in front of the wickets.

Pacer Stokes then joined the party sending back Ishant Sharma for a duck, while Ali struck again, dismissing Mohammed Shami (8).

Curran then performed the last rites, sending back Ravichandran Ashwin, who chipped in with 25 runs down the order as he intended to delay the inevitable.

For England, off-spinner Moeen Ali starred with the ball, picking four wickets for 71 runs while pacers Stokes and Anderson scalped two wickets each.

Blot on khaki: Drunk Odisha cop misbehaves with woman before her hubby