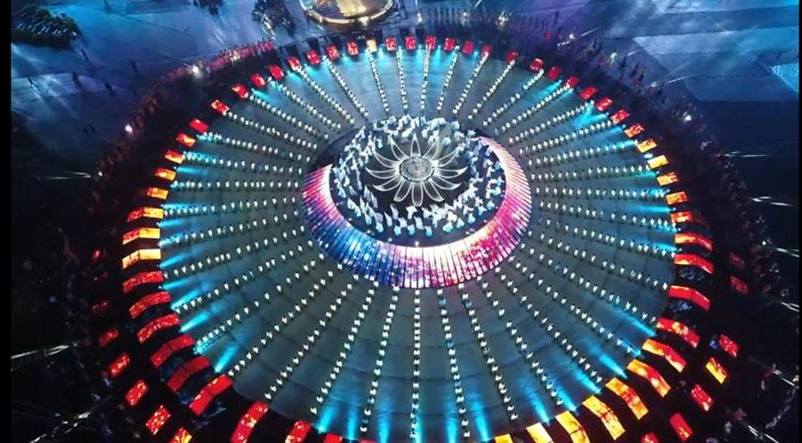 Bhubaneswar: The striking, scintillating and spectacular opening ceremony of the Odisha Hockey Men’s World Cup 2018 was a history-making celebration at Kalinga Stadium in Bhubaneswar, last evening. It was laced with moments that made every Odia a proud citizen of the state.

Odisha Sun Times brings to you the five top moments from the most-awaited sporting spectacle of the year:

No more Guard of Honour for CM & Ministers in Odisha

The audience at the stadium was witness to a breathtaking display of the first drone show in the world. The drones, synchronized to music, suspended in midair and forming shapes and patterns drew gasps from the crowd. Watch video below:

Moreover, the flashing and glittering fireworks when the Chief Minister declared the gala event officially open, lit up the stadium into a dazzling display of lights.

From celebrity host Gaurav Kapoor to the Bollywood Badshah Shah Rukh Khan, speaking a few lines in Odia, our mother tongue seems to have become the official lingo of the world cup clash. Watch video below as Shah Rukh Khan speaks in Odia.

Madhuri Dixit as the Mother Earth

Bollywood dancing diva Madhuri Dixit-Nene enraptured the onlookers as she embodied the elements and characteristics of mother earth in the Earth Song, choreographed by Shiamak Davar and created and directed by Nupur Mahajan.

Along with 1100 artists (that included school children), an ethereal Madhuri Dixit looked like poetry in motion.

The musical evening with A R Rahman

The Academy Award-winning music maestro A R Rahman and his electric performance with songs like ‘Jai Ho’, ‘Vande Mataram’, ‘Humma’, ‘Dil Se’ ‘Dil Hai Chhota Sa’ and the hockey anthem ‘Hai Hind’ with singers like Jonita Gandhi was the pièce de résistance of the evening.

His piano jugalbandi with percussionist Sivamani and sitarist Asad Khan was an exhilarating experience for music lovers across the world.

A stage of hockey legends

It is a known fact that Chief Minister Naveen Patnaik was the goalkeeper during his school days and king of romance Shah Rukh Khan was the centre forward in his younger days in college. It was a picture-perfect moment as these two stalwarts graced the stage with 16 captains of the participating countries of the tournament.

Prior to that, the members of the Indian Hockey Team led by the then captain Ajit Pal Singh, that won the world cup in 1975 were also invited to the stage to share the glorious moments of hockey.