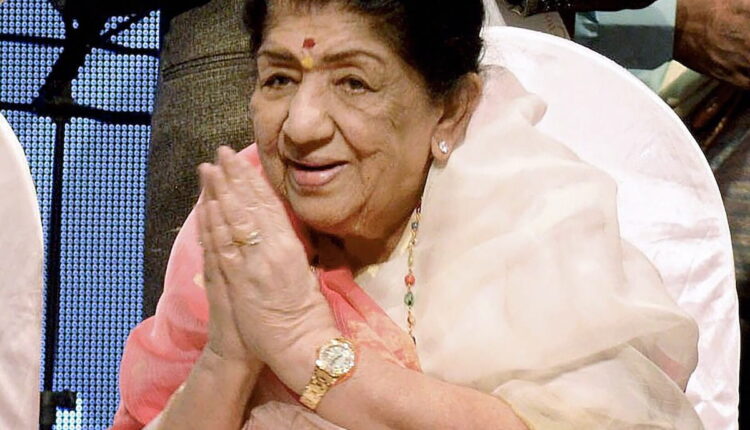 As the flames leapt up to consume the mortal remains of Lata Mangeshkar, Gulzar’s words set to R.D. Burman’s music, which the Nightingale immortalised with her ageless voice — “Meri awaaz hi pehchaan hai …” — kept swirling in the hearts and minds of her followers around the world.

There couldn’t have been more appropriate words to encapsulate the truth that only a few souls are able to stir the consciousness of generations, transcending all boundaries. Lata Mangeshkar was one of those rare souls.

The Nightingale’s radiant image seemed to shine above the political and tinsel stars who had converged at Mumbai’s Shivaji Park to pay their final respects to the departed soul. More than her smile, that famous twinkle in her eye seemed to assure Lataji’s countless fans that she was very much there.

And how can she ever go away? Each of her more than 50,000 songs in 14 languages will ensure her immortality.

As much as her voice is mesmerising, equally her carefully draped saree and tightly held hair with a small round ‘bindi’ in the middle of her forehead will remain etched in the memory of every Indian. She looked very much like a goddess in ‘avatar’. It wasn’t without a reason that generations has regarded Lataji as Goddess Saraswati incarnate.

Lata Didi, as the nation fondly calls her, has forever set the standards that perhaps may never be matched. Singing will never be like hers, although clones are in thousands.

Songs for every mood, every age, all seasons, festivals, celebrations, all occasions of happiness or sadness. From spiritually uplifting bhajans to soothing romantic numbers, to racy, pacy tracks, she did them all in her 73-year career as the voice of the nation.

Not a day or hour goes by when her songs are not being aired, sung by talent hunt participants, or remixed by sound engineers. remixed is not being aired or even hummed. Even for the upcoming generation, her songs are the lessons to be learnt and in musical talent shows aired on TV channels or FM radio, it is mostly her songs that are sung.

Lataji continues to live in her songs. She has been immortalised in her songs, and each time a song by her is sung, Lataji will come alive.

All her songs are iconic; each is unique in its own style. There is no one that is the best, because all are the best. Her voice gave that magical touch to Hindi movies that have always been mostly about song and dance.

Lataji is every singer’s dream, and for the masses her songs are emotions that they have grown with. Listening to her songs on the radio and TV, seeing them picturised in movies, singing them in school and college competitions, or in ‘antaksharis’, and dancing to them in wedding sangeet ceremonies, we have lived Lataji’s songs for decades. They have been a part of the growing-up years of all Indians. Lata Mangeshkar has always been there, the quintessential diet of our emotions.

“Meri awaaz hi pehchaan hai … chehra ye badal jayege … meri awaaz hi pechaan hai … ghar yaad rahe” (My voice will be my identity even if the way I look changes). Gulzar sahab seemed to have written these words, which Lataji sang with Bhupinder Singh in ‘Kinara’ in 1977, inspired by her life.

Lata Didi, as the world will always remember her as, her voice and her face radiating magnanimity will never fade away.

Meet Lata Mangeshkar’s biggest fan Gaurav Sharma, whose house is a ‘shrine’ to her