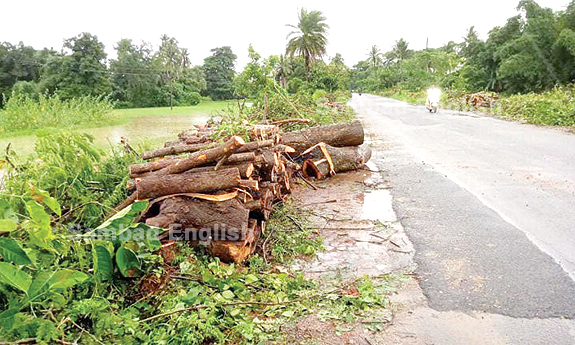 Biridi: A total of 5,715 trees are to be cut off to facilitate Cuttack-Nuagaon road expansion work on NH-55 of Cuttack district and preparation for the project has already started. However, this has caused deep concern for a number of local environmentalists and intelligentsia.

Massive plantation drive was earlier taken up in the region and a green belt was created. Both, new and old trees are now being felled for the purpose and logs of wood are piled on the roadside.

A senior official in National Highways Authority of India (NHAI) informed today that, in the first phase, more than a thousand trees were previously chopped off alongside the road starting from Biridi up to Jagatsinghpur. Trees are to be cut off from Kandarpur locality up to Machhagaon.

As many as 2,498 trees will be chopped off in Biridi alone. At least 1,357 trees now exist on right side of the road and 1,141 on its left, a Forest department official said.

On the other hand, the district administration will take up a plantation drive in future days to recover the loss of trees. Expansion of the road up to Jagatsinghpur district headquarters has become barely necessary, an administrative official explained.