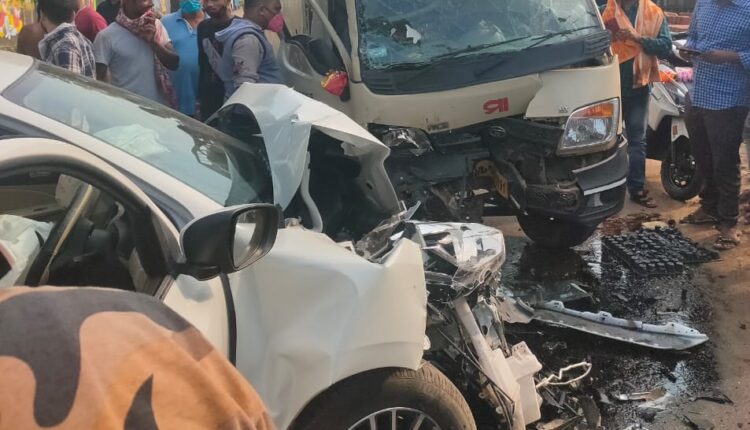 Bhanjanagar: As many as six persons including 4 women were seriously injured after a car collided head-on with a mini-truck in Bhanjanagar area of Ganjam district today.

All the injured persons have been rushed to the hospital, of which Laila, Binodini and Lavanyabati are stated to be in critical condition.

According to reports, Sumant along with Abhijit carrying household goods on a mini-truck was travelling to Phulbani from Bhubaneswar. In the meantime, one person identified as Sambit Behera of Raikia village on a car with 4 women was enroute to a private hospital in Berhampur for eye test. The car collided head-on with the mini-truck near a poultry farm in Bhanjanagar when Sambit turned his car to the right to save two persons on a motorcycle that suddenly came to the front.

On receiving information, Bhanjanagar police reached the spot and rescued all.

The injured persons were sent to the Bhanjanagar hospital for treatment. As the condition of three women were critical, they were shifted to the MKCG Medical College & Hospital in Berhampur.