7 auspicious things that Odias do during holy month of Kartika 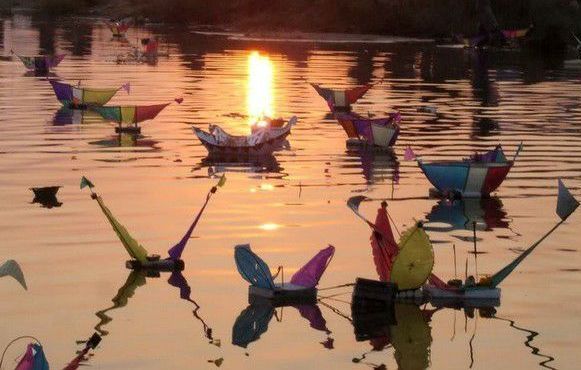 Bhubaneswar: The month of Kartika is considered to be the most auspicious time in the Odia calendar. Starting on Kumar Purnima and culminating on Kartika Purnima, this month (also known as the month of Damodar i.e. Krishna) is that time of the year when a few distinct annual rituals are observed, quintessential of the Odia culture. Here are a few of the practices that Habisyalis (those who observe these rituals) adhere to:

Odia households are known to make simple-cooked meals, without using onion and garlic during this entire month. It is a custom in many families to avoid eating non-vegetarian dishes at this time of the year.

Traditionally women and widows wake up pre-dawn and bathe. They pray in front of the chaura (holy basil planted in small podium or pot in front houses) after making colourful rangolis using muruja around it. They then walk around the chaura clockwise for nine times to pay respects to Rai Damodar (Radha-Krishna).

Akasadeepa is a lighted deepa (earthen lamp) filled with ghee, placed inside an earthen pot and pulled atop an erect pole using a pulley and fastened. It is lighted near the chaura during the evening and burns throughout the night.

Traditionally Habisyalis are supposed to eat only one meal a day, prior to sunset.

One of the biggest Hindu festivals, Diwali, is the occasion for Odias to pay obeisance to their ancestors. The ritual called Badabadua Daka is held in the morning and continues till late evening at ‘Bada Danda’ (the grand road) of Puri and is also performed at the villages.

Holding bunches of jute sticks (Kaunria kathi) in hand, the people set these sticks afire to invoke their ancestors to descend from their heavenly abode and visit the Earth to bless them.

The invocation process involves the chanting of prayer “Badabadua ho, andhaare aasa, aalua re jaa! (Oh hon’ble ancestors, come in darkness and go back along the lighted path!)”. The eldest male member of the family chants these lines and the other members follow suit.

As per tradition, Radha Pada darshan is observed every year on Sukla Nabami, also known as Anla Nabami in the holy month of Kartika.

This is the only day when people get a chance to look at Goddess Radha’s feet in Sakhigopal temple of Puri, which otherwise remains covered throughout the year. It is called the ‘Odiani’ besa of Goddess Radha. It is believed that whoever witnesses the holy feet gets Moksha (salvation).

On the occasion of Anla Nabami, anla (gooseberry) in the form of fruit or juice is offered to deities. Married women offer red bangles, vermilion and sacred thread in front of anla trees for the well-being of their spouses.

The last five days of Kartika month is called panchaka or panchuka. For people who could not follow the rites for an entire month, this is the time to fulfil the customs. Many people visit Lord Jagannath temple in Puri to pay respects to Lord Vishnu at this time of the year, though many devotees (especially widows) from all corners of Odisha, flock to Puri and spend the entire duration of Kartika there.

Boita bandana is observed on the Kartika Purnima that marks the end of the holy month. It is a colourful and vibrant event that celebrates Odisha’s maritime glory and trade relations with foreign countries.

Karthika Purnima also commemorates the beginning of the grandest fair in Odisha, the famed Bali Jatra of Cuttack. The supposedly the largest fair of Asia, this week-long carnival is a foodie’s and shopper’s delight.