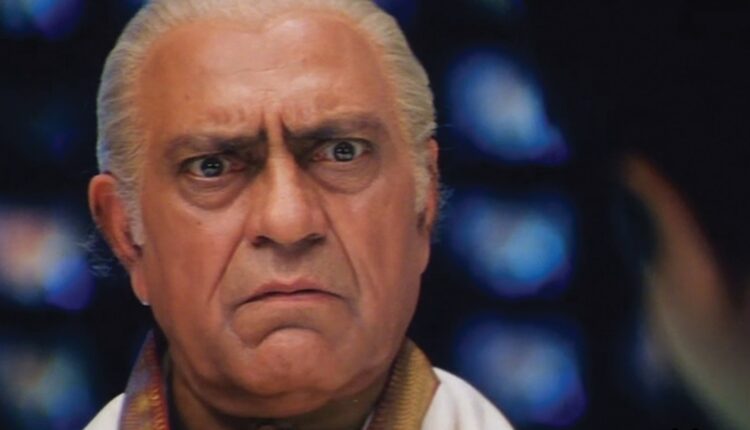 We can bet that you said all of these dialogues aloud, with proper tone, command, and expression!

After all! They are some of the most iconic and celebrated dialogues of our Bollywood heroes.

Since the year 1913, Indian Cinema has been a core integral part of the Indian culture. The movies, the stories, special scenes, unforgettable songs, and the heroes. We have celebrated all of it! That’s not it! Some heroes are even man worshipped in certain parts of India.

While we love how the hero conquers everything and defeats the villain, what does it take for a villain to occupy a special place in the hearts of the public?
There can only be one answer to this: “It definitely takes an ‘Amrish Puri’ to do that!

The actor is most fondly remembered for his villainous roles. There’s nobody else who could do his part so well.

In his career of 38 years, he has acted in over 400 films and some of his dialogues have been so well written, adapted, and delivered that they have become timeless. Let us fondly remember the 8 most iconic dialogues by Amrish Puri that still echo in our heads:

It wouldn’t be wrong for us to say that Amrish Puri was the most legendary father actor of Bollywood. We all remember this special heartwarming moment from ‘Dilwale Dulhaniya Le Jayenge’, one of the most successful films in Indian history. Amrish Puri’s character in the film has become timeless, all thanks to this dialogue. You definitely know what we mean. In fact, the Press Information Bureau took upon the opportunity to create a meme with this dialogue during the Lok Sabha elections 2019 to encourage people to cast their votes.

Another epic dialogue by Amrish Puri is from the movie ‘Phool aur kaante’. It was directed in 1991 and stars Amrish Puri in the role of Nageshwar Don. His only son in the movie doesn’t want to build his career on his dad’s empire but fate has something else in store for him. You definitely shouldn’t miss out on watching this film.

You have been living under the rocks if you haven’t heard of this dialogue yet. It would be an injustice to term this iconic happening only as a dialogue. This has marked to be an entire revolution in its own way and a defining moment. In the 1987 film ‘Mr. India’, Amrish Puri played the role of ‘Mogambo’. The film has been named as one of the 100 Greatest Indian Films of All Time. Click here to read the story behind this dialogue.

Amrish Puri’s compelling dialogue is from the film, ‘Jooth Bole Kauwa Kaate’ which was directed by Hrishikesh Mukherjee and released in the year 1998. Amrish Puri plays the role of ‘Mr. Abhyankar’ in this film who keeps his family in a very orthodox manner. Urmila (Juhi Chawla) his daughter comes up with a scheme to make her father approve of her lover and the storyline later results in hilarious situations.

This is surely one well-delivered dialogue! Amrish Puri played the role of  ‘Ajgar Jurrat’, a dreaded crimelord in the film ‘Vishwatma’, which was directed by Rajiv Rai and released in the year 1992. The storyline of this film revolves around the life of Prabhat Singh (Sunny Deol) who is an honest and dedicated police officer. When we talk of Amrish Puri’s most famous villainous roles, the role of Ajgar Jurrat adds as one very important contribution to the list.

We can seriously define the scene with this dialogue as a ‘Tahalka macha dene wala scene’, quite literally.  Amrish Puri played the role of General Dong, the dictator of land called ‘Dongri-La’ in the movie Tahalka. The actor himself felt that this will mark to be a role that is more impressive than his classic role of ‘Mogambo’ in Mr. India.

Chulbul Pandey might be India’s favorite Bollywood cop character today but back in 2004, Amrish Puri impressed the audience with his performance and dialogues while he played the role of ‘Samar Singh’, the brave police officer in the movie ‘Garv: Pride and Honor’. Salman Khan and Arbaaz Khan also starred in this movie as cops. Watch the movie to find out how this trio of cops face and overcome obstacles caused by corrupt politicians.

This very relatable and true to the time dialogue belongs to Amrish Puri’s character from Raj Kanwar’s movie ‘Deewana’ which released in the year 1992. Amrish Puri played the role of Dhirendra Pratap, the main antagonist in the film. Deewana became the second highest-grossing film of 1992.

We can place our best bets to vouch that these films, the scenes, and the above listed iconic dialogues by Amrish Puri are surely not something that one would be able to forget in this lifetime.

The Worst of Bollywood Remixes