ARUN JAITLEY IS THE NEW KINGMAKER IN BCCI 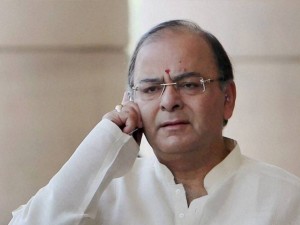 Even the trenchant critic of Narayanaswamy Srinivasan concedes that the only way he could be stopped from having another term as president of the Board of Control for Cricket in India (BCCI), is in the highly unlikely event of Union finance minister Arun Jaitley, considered a friend of his, ditching him.

Jaitley with eight committed votes, including three government institutional votes in an electoral college of 31, is the new kingmaker in the board. It would be interesting to know the number of “courtesy calls” Srinivasan paid on him in the last hundred days. That is assuming the Union finance minister also maintains a visitors log book at his residence like the Central Bureau of Investigation (CBI) chief does.

Jaitley also commands the votes of Delhi, Himachal Pradesh, Gujarat, Goa and Uttar Pradesh. What is surprising is that he has the support of Uttar Pradesh, which is ruled by the Samajwadi Party but headed by Congressman Rajiv Shukla, and of the Congress-ruled Himachal Pradesh Association which has young Bharatiya Janata Party MP Anurag Thakur as its head.

When the board’s constitution was amended in Srinivasan’s first year as president in 2012 to remove the cap on the terms of office of key office-bearers, all big guns supported it in the hope that they, too, could stage a comeback or someone like Jaitley need not wait for his turn for over a decade. By then it was clear that Jaitley’s party would be in power in 2014 and he could succeed Srinivasan.

Now neither Jaitley has time nor will his health permit him to have a finger in every pie. That leaves Jagmohan Dalmiya and Srinivasan to fight it out. Knowing Srinivasan’s clout Dalmiya has also realised that he cannot take him on and decided to join the chief’s bandwagon and extract whatever he could for Bengal.

One needs to understand the pattern of voting at any general body meeting if there is a real contest. Invariably the margin of difference is of one or two votes. If two voters switched their loyalty at the last minute the result is turned on its head what with the winning number being 16. The 31 votes include the president’s, which can be clinching in the event of a tie.

There is no immediate threat to Srinivasan’s authority. His fate will be decided first by the Mudgal Committee probing the corrupt practices in the IPL and inter alia in the BCCI and then the last word will be that of the Supreme Court.

There are already rumours that Shukla could throw his hat into the ring if the Supreme Court verdict goes against Srinivasan. Even while professing his support for Srinivasan, he had a quiet meeting with Sharad Pawar. Like a good Congressman he would say the meeting was in connection with the Maharashtra polls!

Srinivasan mustered at least 17-19 supporters last Sunday in Chennai. That means he has been able to keep them on board even when he is facing grave charges because of his son-in-law. A couple of fence-sitters joined a teleconference to explain their inability to go over to Chennai.

When some board members expressed their ignorance about the so-called meeting, the officials were quick to clarify that it was an informal meeting to “exchange views”. What they did not say is that Srinivasan called a meeting of his staunch loyalists.

One of Srinivasan’s so-called “supporters” was clearly unhappy over his seeking another term. He did not hide his displeasure, saying if people buy votes to stay on for two-three terms when will the others get an opportunity.

The list of officials who went on a jaunt to England during the India-England series will reveal how he nurses his men. The five-Test series and the subsequent five One-Day matches gave the ruling clique a chance to oblige its loyalists.

Officials from almost all the associations from the South Zone had a man in England on an all-paid junket at least for a week. So were his key men from East and North Zones. The principal office-bearers of the BCCI and even senior board staff were also there. Now you know how the support is mustered!

Coming to the Annual General Meeting (AGM) of the BCCI, it has to be called before Sep 30 and barring compelling exceptions it was held in the last week of the month every year. The Srinivasan group is trying to see it is adjourned/postponed till the Boss is cleared and reinstated. The board secretary said so in so many words.

Technically, after Sep 30 all office-bearers, committees and sub-committees of the board cease to exist and if the AGM has to be held this month then a 21-day notice has to be given. The board secretary is either naive or too crafty to state that there is no president to sign the accounts! What is the Supreme Court appointed president Shivlal Yadav doing? Is he not competent to sign the accounts or is it that only a corporate honcho has to do. Could Sanjay Patel throw some light, please?

(Veturi Srivatsa is a senior journalist and the views expressed are personal. He can be reached at [email protected])