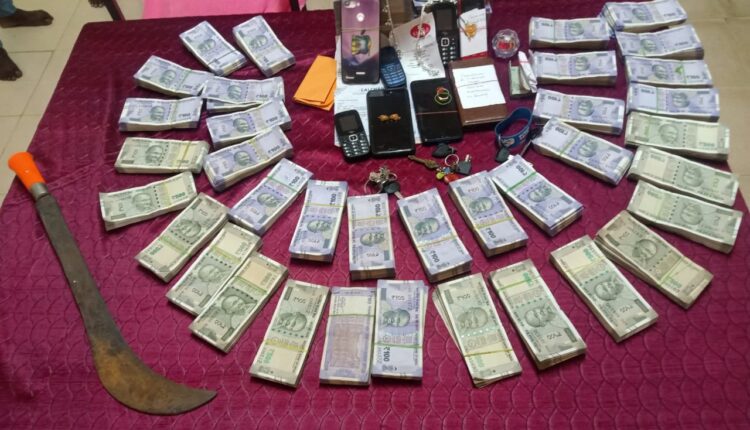 Sambalpur: Police have arrested as many as nine persons, including a minor boy, over their alleged involvement in looting around Rs 35 lakh from two bank employees in Odisha’s Sambalpur district on November 9, informed SP Kanwar Vishal Singh today.

Cops have seized Rs 10 lakh and vehicles worth Rs 5 lakh, which were purchased from the looted money, from the possession of the accused. Two other accused are still at large, the SP said.

Unidentified miscreants had looted the amount from two employees of Union Bank, Laimura branch, Bargarh at Thuntipipal under Kuchinda police limits in Sambalpur district on the fateful day. The two bank staffers were returning to the branch from Sambalpur in a car carrying the cash in a bag when two persons intercepted the vehicle near Thuntipipal.

Later, four other bike-borne miscreants also reached the spot and threatened the bank employees at gunpoint. They snatched the bag containing the cash and fled the place.

“During investigation, police ascertained that one of the accused had visited the bank for routine banking work and noticed that a vehicle that was supposed to go to Sambalpur to collect
cash was likely to return to Laimura in evening. He exploited the loophole that the same vehicle sans security guard was always being used by the bank authorities to transport cash. He intimated it to another accused,” police said in a statement.

While six persons remained present on the spot and committed the dacoity, others were involved in logistics arrangements/recce and transportation, the statement added.