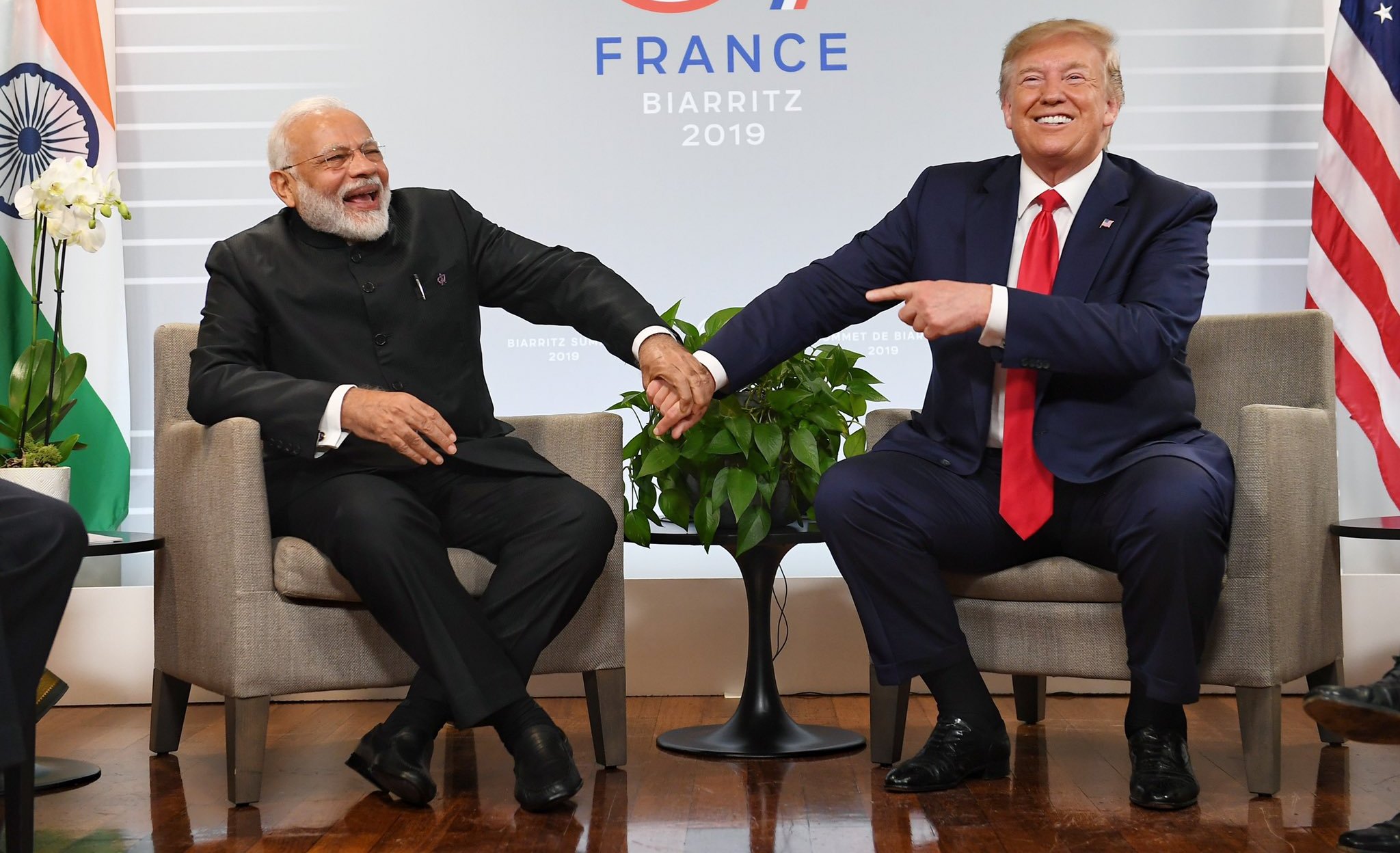 With the defeat of Trump and the victory of Democrat Joe Biden, many Indians feel elated that the monster, Trump has lost power while some others believe that term for incumbent president Donald Trump would have been better for India as many see him as a close friend of Prime Minister Narendra Modi.

Actually, Trump, the deadly demon, was never pro-India but pro-Modi and vice-versa. The reason is that both were in the same boat and have some common features, characteristics. The bonhomie between Trump and Modi was due to their individuals’ interests and has little to do with India’s interest. Both have tried to promote each other’s political interest through the “HowdyModi” and “Namaste Trump” program at the cost of taxpayers’ money with ‘Trump describing Modi as the father of India.

Trump has never helped India rather has indirectly harmed India a lot. The saga of accusation, the pressure is colossal. Trump had advocated India’s cause to become a member of the Nuclear Suppliers Group (NSG) and getting a permanent seat in UN Security Council with China, France, Russia (formerly the Soviet Union), the United Kingdom, and the United States. But it was just a gimmick to hoodwink Indians. Even Trump administration’s support for India during the Galwan crisis did not stem from any inherent concern for India’s security. Instead, it was a reflection of his stubborn view of the People’s Republic of China (PRC).

In December 2017, the US refused to take any decision on the food subsidy issue in the ministerial meeting of the World Trade Organization (WTO), crushing India’s expectations of securing a better deal for its food security program and likely wrecking the event. The US had said blatantly it will not offer any more relaxation on food security programs as demanded by India and China along with others.

It is noteworthy, a provision has been made that subsidies provided by the government cannot exceed 10 percent of gross agricultural production. There are talks about taking actions, including trade sanctions, against countries where subsidies exceed this level. However, India has got an exemption from this rule by using the peace clause as the US did not help.

Trade negotiators generally refer to Article 13 of the World Trade Organization’s Agreement on Agriculture as the Peace Clause. Article 13 holds that domestic support measures and export subsidies of a WTO member that are legal under the provisions of the Agreement on Agriculture cannot be challenged by other WTO members on grounds of being illegal under the provisions of another WTO agreement.

The Peace Clause expired on January 1, 2004. Another temporary peace clause was made at the WTO Bali conference in December 2013. It stipulated that no country would be legally barred from food security programs for its own people even if the subsidy breached the limits specified in the WTO Agreement on Agriculture.

In fact, in 2017, the US was on the brink of imposing trade sanctions on India through the WTO over a decade-long poultry dispute. In June 2017, Trump pulled the US out of the 2015 Paris climate agreement, by arguing that it would have made the US pay for countries like India and China that were benefiting the most.

In response to Joe Biden’s statement that climate change is “an existential threat to humanity “. During his second and final presidential debate, Donald Trump renewed his criticism that action on climate change was unfair to the US and called India’s air “filthy” and clubbed it with Russia and China. On 29 September he had also accused India, China, and Russia of contributing to global pollution.

The Paris Agreement is a landmark environmental accord that was adopted by nearly every nation in 2015 to address climate change and its negative impacts. The deal aims to substantially reduce global greenhouse gas emissions in an effort to limit the global temperature increase in this century to 2 degrees Celsius above preindustrial levels while pursuing means to limit the increase to 1.5 degrees.

The agreement includes commitments from all major emitting countries to cut their climate-altering pollution and to strengthen those commitments over time. The pact provides a pathway for developed nations to assist developing nations in their climate mitigation and adaptation efforts, and it creates a framework for the transparent monitoring, reporting, and ratcheting up of countries’ individual and collective climate goal.

Not only did Trump have no intrinsic interest in India, he exhibited an almost grumpy attitude when dealing with a trade dispute with Indian government. He imposed an array of tariffs on Indian goods even though the trade deficit with India is of little significance to the overall US trade balance with the world.

In March 2018, the US raised duties on Indian exports of steel and aluminum under Section 232 of the US Trade Expansion Act of 1962 on “national security” grounds. Despite several pleas, America has not given India an exemption from it. In March 2019 US commerce secretary Wilbur Ross accused India of imposing restrictive trade policies that burden foreign companies.

In March 2019, giving yet another push to his “America First’ plank as part of his ongoing protectionist spree, Trump, terminated the preferential trade treatment for India, currently being extended under its Generalised System of Preferences (GSP) programme. US took this decision when India was preparing itself to welcome Trump for Namaste Trump program.

The Generalized System of Preferences (GSP) is America’s oldest preferential trade scheme, which offered Indian exporters tariff-free access. Along with a list of self-declared developing countries. This move by the US to take off India from the list of developing nations, which stopped all chances of India reclaiming its benefits under the GSP scheme. According to the data from the United States Trade Representative’s (USTR) office, India is the largest beneficiary nation under the GSP, with total benefits from tariff exemptions amounting to $260 million in 2018.

Trump ‘s administration did he show the slightest bit of compassion towards India’s concerns about the dramatic and consequential limits that he placed on H-1B visas based upon the most erroneousgrounds. The H1-B visas, the most sought after by Indians, is another area where Trump has cracked down and proposed curbs. Though a US court stayed the move, Trump’s decision to halt all non-immigrant visas, including H1-B, caused tension among Indians, especially in the IT sector. Indians are the largest beneficiaries of the H1-B visas, with the number of applications increasing consistently since 2011.

Many Indians who aspire to work in America are facing a setback due to Trump’s curbs and sweeping changes on H-1B visas and other visas. There is no current country-specific limit on the 85,000 H-1B work visas granted each year, and an estimated 70 percent go to Indians. The work visa H-1B, which allows immigrants to live and work in the US for up to six years and is extensively used by Indian IT companies, has been battered and bruised since Trump came to power in January 2017.

Immigrant visas are issued to foreign nationals who intend to live permanently in the United States. Non-immigrant visas are for foreign nationals wishing to enter the United States on a temporary basis – for tourism, medical treatment, business, temporary work, study, or other similar reasons. The H-1B visa is a non-immigrant visa that allows US companies to employ foreign workers in specialty occupations that require theoretical or technical expertise.

While on one occasion, the Trump administration reduced the quantum of H-1B visas to be granted by capping the upper limit, in some other times it made the qualifying criteria for the visa tougher or sought cumbersome paperwork and increased the fees enormously, reduced Indian quota among other things.

Just before the US Presidential election, the US issued two new rules that make it harder for US companies to employ people on H-1B non-immigrant visas which will affect Indians more. It changed the definition of a specialty occupation and employee-employer relationships, as well as limited the validity of an H-1B visa to one.

The minimum wage levels at which H-1B employees can be hired have also been increased significantly. Since Companies will have to pay much higher salaries and the criteria to qualify an employee for an H-1B will be much harder, they will not employ outsiders including Indians. The share of Indian tech companies in the top 10 visa recipients has been dropping steadily in favour of American tech companies such as Apple, Amazon, and Google.

From green card holders, students, and H1-B visas, the numbers have been steadily gone down. Take the lawful residence permits or green cards. According to Department of Homeland Security, the number of Indians who got green cards was 64687 in 2016. This has declined to 54495 in 2019 a decline of 8.9 percent from the previous year.

India is always a victim of Trump’s protectionism, unilateralism. His administration used a blunt cudgel to browbeat India to stop importing oil from Iran as part of complying with the US sanctions on Teheran. Since the US walked out of Iran’s nuclear deal, India was pressurized to increase the purchase of shale oil from the US. This made India get deprived of importing oil at cheaper prices and even saving foreign exchange as India could have paid import bills in terms of the rupee.

China has more than $3 trillion in foreign exchange reserves, about one third is held in US Treasury bonds. According to data released by the US Treasury Department in mid-April, China’s holdings of US Treasury bonds reached $1.09 trillion in February. If China withdraws those, the American economy will collapse.

Trump was blaming and spewing venom against China just to hoodwink Americans but so toothless that he or any president cannot harm China at all.  America wants to use India as a junior strategic partner. America try to appease India sometimes so that India will purchase its armaments that can boost jobs in that country. India is preferring to be its junior strategic partner as it has continuous border problems with China. However, India should be neutral to both two powerful countries. Can India expect a more nuanced policy under a Biden-Harris administration?

DISCLAIMER: The views expressed in the article are solely those of the author and do not in
any way represent the views of Sambad English.