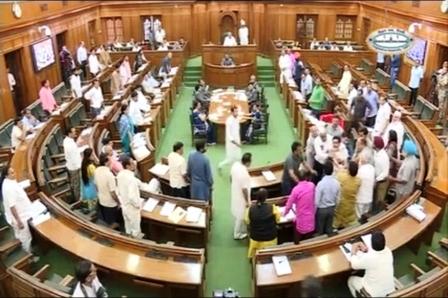 Sacked Delhi Minister Kapil Mishra was on Wednesday manhandled in the Delhi assembly by AAP members after he raised allegations of corruption against Chief Minister Arvind Kejriwal and Health Minister Satyendra Jain.

The former Water Minister who has been campaigning against Kejriwal, levelling graft allegation against him, later claimed he was “punched” and “kicked” by five-seven Aam Aadmi Party legislators after he demanded an open session of the Delhi assembly be convened at Ramlila Maidan to publicly discuss the corruption charges.

Mishra hurled a banner inside the house demanding the special session of the assembly, following which he was warned by Speaker Ram Niwas Goel.

When he refused to relent, Goel ordered Mishra be marshalled out of the house.

Before the marshals could reach Mishra, he was manhandled by Aam Aadmi Party members. He was later taken out of the house by marshals.

While Speaker Goel said both Mishra and the legislators who manhandled him may face action, the Congress and the Bharatiya Janata Party condemned the assault.

Talking to the media outside the assembly, Mishra said he had written a letter to Goel on Tuesday, urging for the special public session.

“I wanted to discuss inside the assembly about their corruptions. When I did not get the opportunity, I called for convening a special session at Ramlila Ground. Suddenly the (AAP) MLAs rushed to me and started hitting me,” Mishra told the media outside the assembly.

“This is for the time in an assembly, that instead of marshals, MLAs are sent to assault another MLA,” said Mishra who was seen being dragged out of the house by AAP members.

He claimed he was punched on the chest and kicked in the back.

“Following a gesture by (Deputy Chief Minister) Manish Sisodia, several of the MLAs assaulted me,” said Mishra, adding that he could only identify two of the legislators — Madan Lal and Jarnail Singh– who attacked him.

Mishra said he would raise the attack issue with Lt Governor Anil Baijal and on June 3, at the Constitution Club here he would present before the people the documents to prove wrongdoings by Kejriwal and Jain.

“I am not afraid of you, no matter how many goons you send, I will not be deterred, I will expose all your scams and corruptions.”

“Whatever happened today is unfortunate. What the MLAs did was wrong. One may do whatever he wants outside, but inside the assembly, one needs to maintain the discipline and decorum,” the Speaker later told the media, adding that the lawmakers may face action for their behaviour.

Condemning the assault, Congress spokesperson Sharmistha Mukherjee told IANS: The AAP is using brute force of its majority. After trying to suppress voice of the opposition, they are now suppressing the voice of their own MLA.”

She said the attack was a crisis for the democratic principles.

BJP leader R.P. Singh told IANS: “The LG should ask for all the records, including the video footage, and take appropriate action.”

Slamming Kejriwal over his silence on Mishra’s allegations, Singh said: “The issue was related to corruption and it was the reason why they are now behaving in such manner.”

IS claims responsibility for Kabul bombing