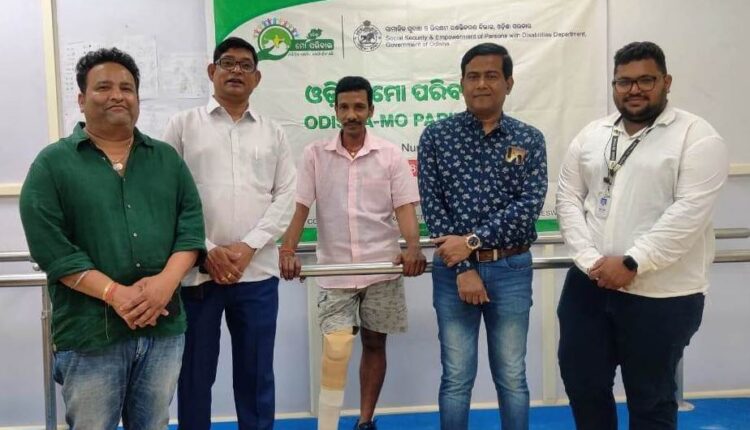 Bhubaneswar: An artificial limb was provided today to 39-year-old youth Pratap Kumar Jena belonging to Jagatsinghpur district, who had once lost his leg in a road mishap.

Pratap was shown the ray of hope by an NGO named ‘Odisha-Mo Paribar’, a source said.

According to the source, following the death of legendary statesman Biju Patnaik, Pratap had come to Bhubaneswar on April 17, 1997 to cast his (the latter’s) last glimpse upon the departed leader.

Unfortunately, a bus had hit Pratap near Master Canteen Square here leaving him grievously injured, when he was returning home. He then sustained injuries on his right leg and subsequently a team of doctors amputated the affected limb. Life became miserable for him after that.

The accident victim was using an artificial leg that he had obtained from Artificial Limbs Manufacturing Corporation of India (ALIMCO) in Olatpur of Cuttack in 1998, which got run down over few years.

“Previously, I was living in a state of despair. With the help of this artificial limb, I will now be able to walk and be able to eke out a living for myself,” the accident victim Pratap gleamed.