After 4 decades, baby Gharials back in Satkosia 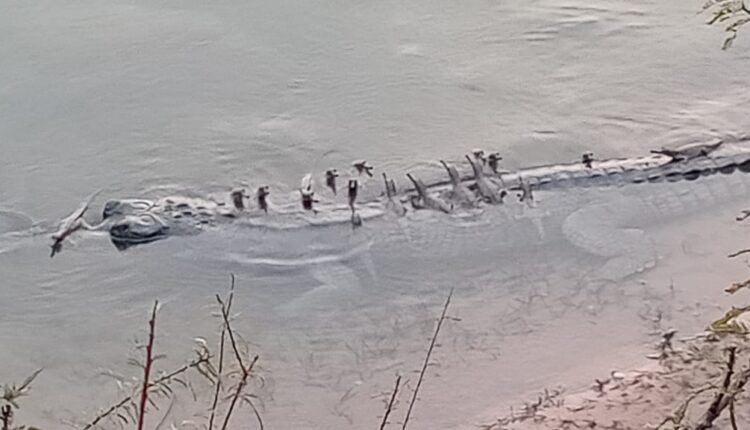 Angul: Good news for wildlife lovers as the population of gharial – the pride of Satkosia Sanctuary – increased nearly after a gap of 40 years.

A picture has surfaced showing an endangered crocodile gave piggyback ride to as many as 28 babies in the freshwater of Mahanadi River in Satkosia gorge.

The sanctuary had only three gharials (two female gharials and one male gharial) since long years. The baby gharials are assumed to have been born to them. With the newborns, the pride of Satkosia is now back after four decades.

In the meantime, concerns have been raised over the safety of baby gharials from other ferocious crocodile species in Satkosia gorge.

Gharial is one of the most endangered species of crocodiles in Odisha and Satkosia gorge is the only natural habitat of the wildlife.

In 1981, the wildlife researchers had released a few gharial hatchlings, which had come out of eggs under an artificial condition, into the freshwater of Mahanadi following which Tikarpada became famous for crocodile conservation centre in Odisha.

However, the efforts did not last for long time. The Satkosia gorge that was packed with hundreds of gharials enhancing the beauty of the sanctuary was confined to only two to three gharials, as the population of the species started declining.

In a bid to increase their population, the State Government had launched a project in 2019 by bringing baby gharials from Nandankanan for breeding in Satkosia.

Although the crocodiles from Nandankanan are yet to breed, the natural environment has returned to the river for adult crocodiles for breeding.

“The adult crocodiles who were not involved in procreation process even after living together in the gorge for many years, have given birth to new gharials,” Crocodile Conservation Project Advisor Professor Sudarsan Maharana told ‘Sambad’.

As many as 28 gharial babies have been spotted at Baladamara area of the sanctuary. We are monitoring their activities and their safety will be our priority, said Satkosia Field Director Pradeep Raj Karat.

Here’s how to use home testing COVID-19 kits