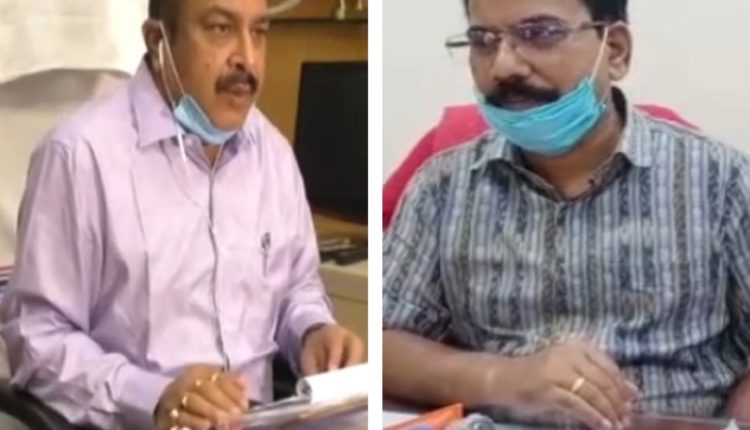 Jajpur/Bhadrak: With containment restriction returns in several gram panchayats in Bhadrak district, an alert has been sounded in Jajpur for possible contamination of novel coronavirus (COVID_19) in the neighbouring district.

Following detection of fresh cases in Bhadrak, Jajpur Collector urged people with travel history to report to the government at the earliest revealing connection between one of the infected persons in Bhadrak and a few people in Jajpur district.

In a statement to mediapersons, Jajpur collector Ranjan Kumar Das said that out of five cases in Bhadrak, one person had come in contact with five persons from Jajpur district during his way back to Odisha from Kolkata.

Sharing information in details about the trip, he said, “one of the persons tested positive for COVID-19 in Bhadrak district had travelled to Odisha from Posta, Burrabazar near Howrah in Kolkata with five others from Jajpur district in a van on March 29.”

He said that six persons including one from Bhadrak had headed to Odisha at 9.00 pm on March 29 in a van (Maruti Omni). They had halted at a place during the trip. Next morning on March 30, the vehicle dropped that person at Neulia Chhak in Bhadrak district. Later, he tested positive for COVID-19.

Giving details about Jajpur persons suspected to be infected with the deadly virus, the district magistrate said that as per the person from Bhadrak, they were all supposed to be labourers and they were talking among themselves to alight at Sathipur in Jajpur district.

Through media, he appealed to residents of villages situated adjacent to Sathipur to inform the administration if anyone with travel history to Kolkata had reached the villages after March 30 morning.

An hour of his statement, five new cases of COVID-19 were reported from the district. With the fresh cases, the total number of infected persons rose to 7 in Jajpur.

However, Bhadrak Collector refuted the alleged link of a person with persons belonging to Jajpur district.

“No person from Bhadrak out of five positive cases is connected with Jajpur. We had prepared a database of people, who had arrived in Bhadrak from other states. The persons, who had link with Jajpur people, had undergone rapid test to detect COVID-19, but the result of tests came negative. Before collecting their samples, they were kept in institutional quarantine,” Bhadrak Collector Gyana Das said.

When asked about the possibility of link of any positive person with previous positive cases in Bhadrak town, he made it clear that there is no connection between previous and today’s cases.

“The previous three positive cases detected in Bhadrak town had no connection with recent five cases. Earlier, one person had travel history to Dubai and two others had returned to home town from Delhi,” he said.

With the detection of five more positive cases of COVID-19 in Bhadrak district, a contradiction between statements of two district administrations in Odisha over alleged link of a positive patient with a few persons in Jajpur district raises suspicion over the exercises being carried out for contact tracing and identification.

Worth mentioning, Bhadrak has reported total eight COVID-19 positive cases so far with detection of five fresh cases today. Out of 8, three persons have recovered from the disease recently.

As per the Information & Public Relation Department of the Government, five persons who have tested positive for COVID-19 in the district today, are all male persons between the age group of 48 to 66.