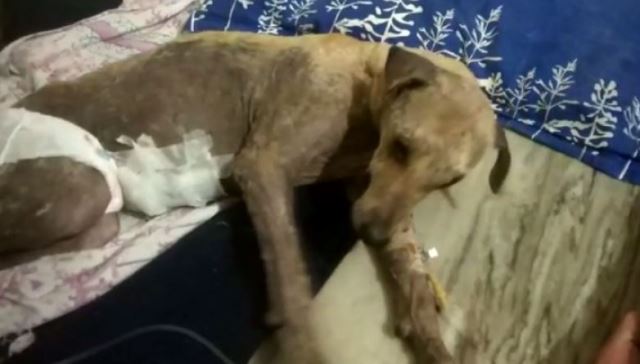 Bhubaneswar: Ensuring justice to the pregnant stray dog that was mercilessly beaten to death in the state capital few days back, Lingaraj police today registered a case against the woman culprit ‎today.

Bhubaneswar DCP  Anup Sahoo informed that the culprit has been identified and booked under Section-268 and 429 of IPC  and Section- 11 of Cruelty to Animal Act.

“In view of the Supreme Court’s direction on arrest during COVID-10 pandemic, a notice has been served and the accused will be chargesheeted soon,” said the DCP.

It needs mentioning that the heart-wrenching incident took place on April 21 when a woman in Lingaraj area here accompanied by few other persons thrashed a pregnant stray dog on the road with a rod. Unable to bear the pain after being beaten, the voiceless animal collapsed on the spot.

The bruised dog was later rushed to a veterinarian by some animal lovers in critical condition. The doctors had to pull out three pups from the dog as it was in no state to give birth. Although the delivery was successful, the surgery could not save the dog. Later, one of her puppies died within few hours.

The incident had incited animal lovers residing in the state capital while some of them filed a case at Lingaraj police station demanding arrest of the cold-hearted woman.

No home quarantine option for returnees in Odisha’s Berhampur