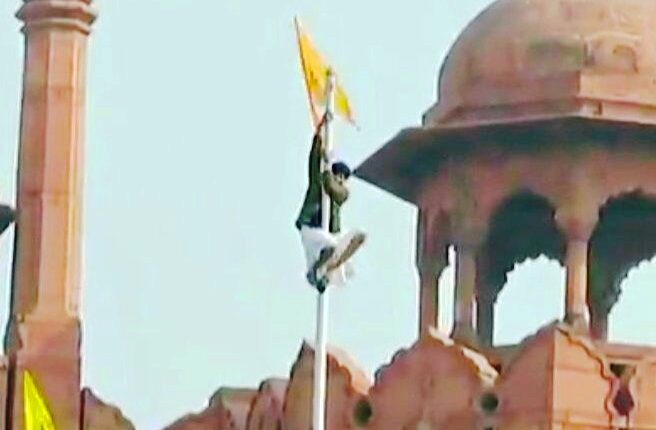 New Delhi: In unexpected developments, hundreds of protesting farmers swarmed the historic Red Fort on Tuesday as their ‘Kisan Gantantra Parade’ turned violent at several places in the national capital.

A large group of farmers riding tractors and motorcycles thronged the Red Fort carrying the tricolours and farmer union flags in their hands. A few youths even climbed up the flagpole on the 17th century landmark and put up a saffron-coloured pennant.

Visuals from the spot showed farmers swarming the Red Fort even as hundreds of others played a cat-and-mouse game with Delhi Police personnel near the ITO intersection in central Delhi, which witnessed chaos as security personnel were clearly outnumbered by the protesters.

Other video clips showed farmers chasing away policemen on foot as well with tractors, and trying to remove a DTC bus parked across the ITO road stretch by pushing it out of way with a tractor.

The police fired tear-gas shells and lathi-charged the protesters on multiple occasions as farmers remained adamant to move towards the Red Fort.

The farmers, after confrontation with police that lasted for around 40 minutes, moved towards Deen Dayal Upadhyay Marg, which houses the offices of Aam Aadmi Party (AAP), Delhi Congress and Bharatiya Janata Party (BJP).