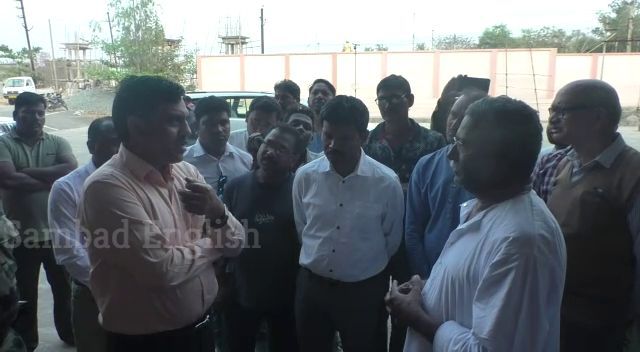 Jharsuguda: After getting assurance from Jharsuguda Collector Saroj Kumar Samal to look into the demands, family members of former legislator Anup Sai withdrew their dharna today. The family members of Anup had been staging a dharna since 7 pm yesterday demanding police protection.

Accompanied by Project Director of DRDA, Tapiram Majhi, the Jharsuguda Collector held discussion with Anup’s family members for 15 minutes. Following this, family members of Anup withdrew their stir at around 5 pm.

The Collector assured them to recommend the Home department for a CBI probe into the double murder case in connection which the legislator has been arrested by the Chhattisgarh Police.

Anup’s wife, son, daughter, brother and sister-in-law staged a dharna in front of the Jharsuguda Collectorate last evening. They alleged that the Raigarh Police of Chhattisgarh threatening them to pick up from their home.

Anup’s elder brother Pramod Sai said if Odisha police protection is not provided to the family members of the former legislator, they will commit suicide.

Anup’s wife Sushma said her husband has been falsely framed in the double murder case.

Worth mentioning, Anup was arrested by Chakradhar Nagar police last week for his alleged involvement in murder of Kalpana Das and her minor daughter Babli in 2016.