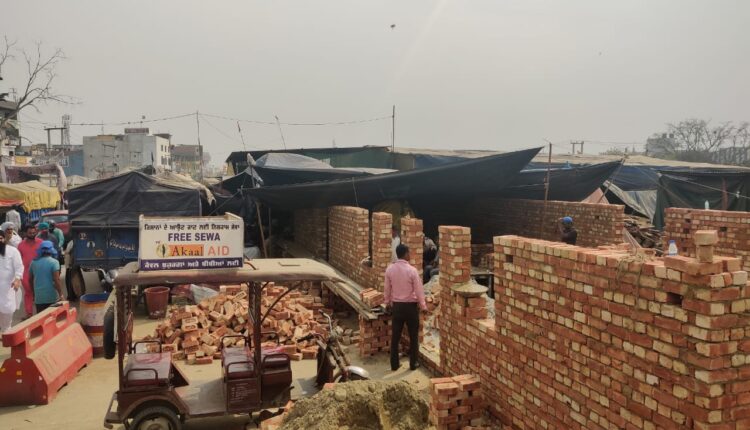 Singhu (New Delhi): In order to deal with the scorching summer heat, on the 106th day of their agitation, farmers have started building ‘pucca’ houses (permanent structures made of bricks) at the Singhu border.

These houses can be easily seen when one moves a few kilometres ahead of the protest site at Singhu border.

Now houses are being constructed at places where the farmers had earlier pitched tents. For building ‘pucca’ houses with bricks, masons have been called all the way from Punjab.

Karamjit Singh, who looks after the media cell of the Samyukta Kisan Morcha (SKM), told IANS,”On Friday, farmer leaders from Punjab discussed constructing ‘pucca’ houses at Singhu border. The meeting revolved around ways to protect farmers at the border from the scorching summer. There are four houses in all being built at the border, but their number is likely to increase. All these houses will be two-storeyed.”

“Due to a large number of farmers at the border, these two-storey buildings are being built and if the agitation is prolonged further, our preparations need to be stronger.”

Earlier, farmers had set up plastic tents at the border, in which they could brave the winter chill but with the onset of summer, it will be difficult to stay in these tents.

Mosquitoes in the night and the scorching sun during the day has compelled farmers to build ‘pucca’ houses at the border.

The manner in which farmers are preparing to build pucca houses displays their resolve: they are not prepared to return to their homes till the goverment repeals the three farm laws.

Farmers have been agitating on Delhi’s borders since November 26, seeking the repeal of three agricultural laws passed by the Centre.