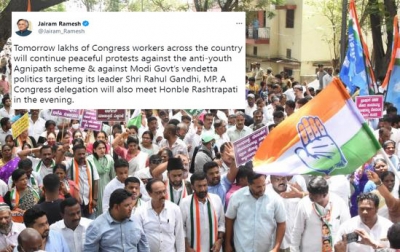 New Delhi: As Rahul Gandhi is scheduled to appear before the Enforcement Directorate (ED) in National Herald case on Monday, the Congress is gearing up to protest on two issues — Agnipath scheme and Rahul Gandhi’s questioning by the ED.

He also said that Congress delegation will meet President Ram Nath Kovind in the evening.

The Congress will start its day with party General Secretary Ajay Maken addressing a press conference at 9 a.m. on Monday.