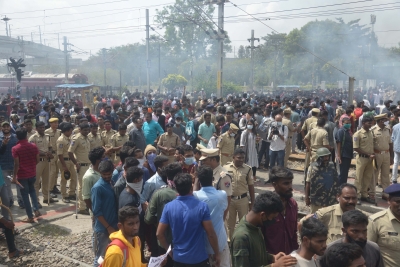 Patna: In view of massive violence by those protesting against new ‘Agnipath’ recruitment scheme for defence forces, the Bihar government on Friday has cut internet and mobile services in 12 affected districts for 48 hours.

The state government observed that internet was used to transmit objectionable substances on social media platforms leading to violence in the state, with lives and public properties hit.

Internet and mobile services have been cut from 2 p.m. on Friday till 2 p.m. on Sunday. Following the stoppage of internet services, they would not use any social media platforms such as Facebook, Whatsapp, Twitter, QQ, Wechat, Qzone, Tublr, Google+, Baidu, Skype, Viber, Line, Snapchat, Pinterest, Telegram, Youtube etc. The idea is to break the chain of communication among agitators.

Youth organisation have called for Bihar Bandh on Saturday and further violence is expected, adding that the decision was taken as precautionary measure.