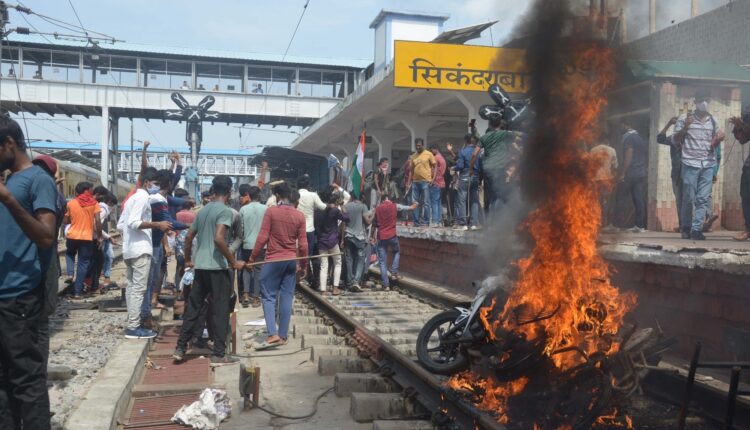 Hyderabad: Railway police have arrested 30 people in connection with the violence at Secunderabad railway station and were probing the alleged role of private defence academies training army job aspirants.

Police suspect 12 of those arrested play a key role in arson and vandalism. Two accused who brought petrol and set afire train coaches have reportedly been identified.

The directors of some private academies are suspected to have provoked the youth and mobilised them by creating WhatsApp groups.

They created WhatsApp groups like Hakimpet Army Soldiers, Secunderabad Railway Station Blocks, and 17/6 to circulate messages to the youth to reach the railway station for the protest.

The officials probing Friday’s violence suspect that one Subba Rao from Andhra Pradesh who runs a defence academy to train the aspirants played a vital role. He is reported to have been picked up for questioning.

Similarly, the organiser of an academy in Karimnagar is also suspected to have mobilised the youth.

Railway and police authorities were caught unaware as more than 1,000 youth on Friday morning barged into the Secunderabad railway station and went on a rampage, burning train coaches, damaging parcel goods and ransacking stalls.

Railway police had opened fire to quell the violence, resulting in the death of one army aspirant and injuries to some others.

Secunderabad Railway Police booked cases against those indulged in violence.

Hyderabad Police late Friday announced that they will probe the conspiracy angle in the violence.

The top officials have been asked to find out the aobjective, conspiracy and detailed planning which was done to create such violent incidents and damage the railway properties’.