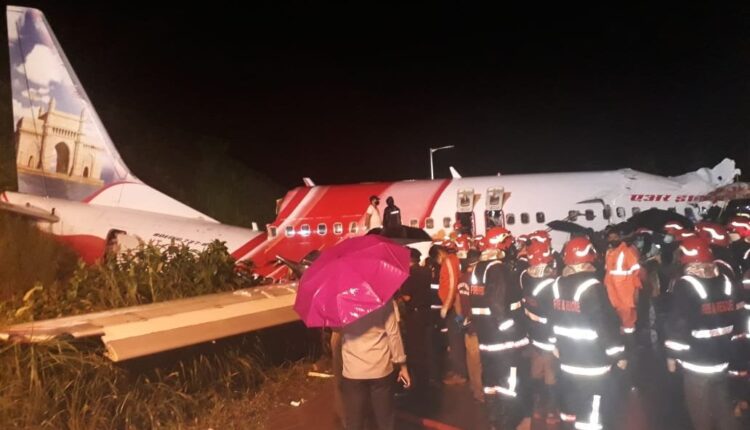 New Delhi: Heavy rains, along with low visibility, are being cited by aviation industry experts as the key reasons that caused the horrific plane tragedy at Kerala’s Kozhikode airport on Friday.

According to a senior Airports Authority of India official, factors related to the inclement weather seem to have led the aircraft to land some 1,000 metres ahead of the safety margin – the required runway length mandated for aircraft to land at airports like the one in Kozhikode.

The aircraft seems to have cleared the required ground-roll area and landed deep into the touchdown zone.

“As of now, we just know that heavy rains, low visibility and gusty wind conditions might have forced the aircraft to land some 1,000 metres ahead of the safety runway margin,” the official added.

Contacted for a comment, the AAI’s official response to IANS was that the aircraft touched down near taxiway ‘C’ which is approximately 1,000 metres from the beginning of runway 10.

“It was raining over the airfield and reported visibility at the time of landing was 2,000 metres and wind direction and speed was 270/08 (the wind was gusting from 8 to 17 knots),” the AAI said in a statement.

It said that runway 28 was in use and the pilot attempted the first landing on it “but after a missed approach, he requested for runway 10”.

The AAI also pointed out that both the runways at Kozhikode are equipped with the Instrument Landing System (ILS).

“The airport’s safety services were pressed into action as per airport emergency plan for timely action,” the statement said.

Senior aviators, however, pointed out that the aircraft could have been diverted, as the airport in question is said to have rubber deposits on the runway, making it more prone to skid accidents. “It seems that multiple factors were at play here,” said one of them.

Other industry insiders say that a ‘Central Lighting’ system is urgently required at the airport.

“Even though they have the ILS system in place, still central lighting equipment needs to be installed at the runway,” an industry insider told IANS.

“Without the central lighting equipment, it is a ‘Dark-Hole’ approach to land at the airport.”

Other aviators have cited the need for an expanded runway area.

In all, the aviation industry agrees that a number of factors contributed to playing out of this tragedy.

Meanwhile, the Indian Commercial Pilots’ Association (ICPA) stressed the need to avoid speculation and theories as to the circumstances of this accident.

“We are also willing to offer any assistance to the Aircraft Accident Investigation Bureau in order to help gather facts and any other safety and security information which may be pertinent to this tragic event,” the ICPA said in a statement.

Similarly, the International Federation of Air Line Pilots’ Associations, which represents more than 100,000 pilots in nearly 100 countries, said: “Whilst the emergency and recovery efforts are still taking place, IFALPA stresses the need to avoid speculation and theories as to the circumstances of this accident.”

“The Federation has reached out to its local Member Association, the Air Line Pilots’ Association-India (ALPA-India) and will offer its technical expertise to the Aircraft Accident Investigation Bureau of India in order to help gather facts and any other safety and security information which may be pertinent to this tragic event.”

On Friday, Kerala witnessed one of the worst air accidents, as an Air India Express flight, returning from Dubai under the ‘Vande Bharat’ mission with 190 people on board, skidded off the runway at the ‘table top’ airport in Kozhikode, and plunged 35 feet into the valley below, leaving 18 persons dead, including both the pilots.

The Centre has said that a formal enquiry will be conducted into the incident by the AAIB, which was formed in 2012 as an independent accident probe committee under the Ministry of Civil Aviation.