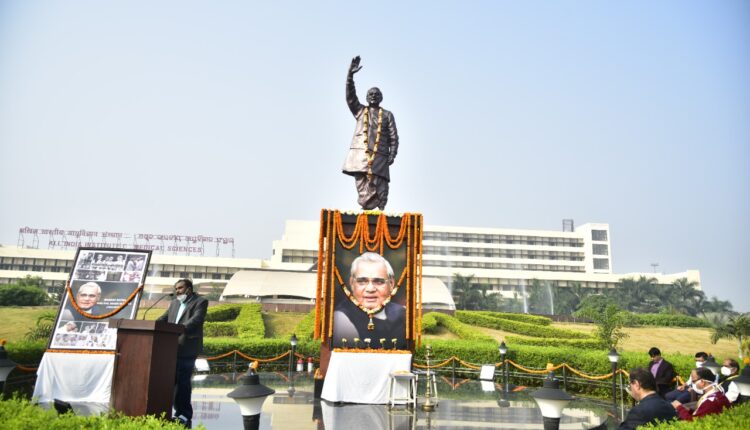 Bhubaneswar: Former Prime Minister, legendary statesman Bharat Ratna late Atal Bihari Vajpayee will be always there in the hearts for his special affection towards the people of Odisha which made a series of big-ticket developmental projects for the state.

Being the founder of AIIMS Bhubaneswar Vajpayee brought a radical change in healthcare sector in the State. Reiterating the dynamism of Late Atal Bihari Vajpayee AIIMS Bhubaneswar paid rich tributes to Bharat Ratna on his 97th birth anniversary on its premises today.

The country is observing the day as Good Governance Day. A meeting to mark the occasion was also organised today at AIIMS Bhubaneswar. Dean(Academics) Prof Debashis Hota, Deputy Director (Administration) PK Ray, Prof Ashok Jena In-charge Medical Superintendent and Maj MC Sahoo were among the dignitaries to grace the event.

To celebrate the occasion in a different manner a cleanliness drive just outside the AIIMS Bhubaneswar campus was carried on by AIIMS Bhubaneswar NSS Volunteers, Youth for Seva team and waste handlers of the institution. Local vendors and public sensitised to keep their environment clean and safe on the occasion by Medical and Nursing students. This effort of the students and volunteers was highly appreciated.