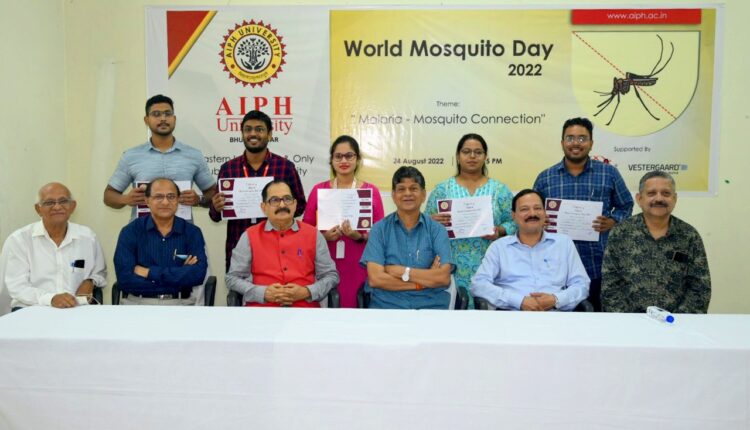 Bhubaneswar: AIPH University Bhubaneswar, eastern India’s first and only Public Health university organized a programme on Wednesday to commemorate the World Mosquito Day 2022. The theme of the meeting was ‘Malaria Mosquito Connection’. The speakers at the programme discussed ways and means to control malaria and other vector borne diseases.

The welcome address and opening remarks were given by Professor Pradeep Panda, Dean – School of Public Health, AIPH University Bhubaneswar, who coordinated the whole event.

In his address, Chief Guest Soumya Ranjan Patnaik, Editor, Sambad, said earlier people used to ignore the necessity of Public Health. “However, the Covid pandemic taught us the need for Public Health,” he said adding, “the AIPH University, which is the first and only Public Health institution in Eastern India is making people aware in this field. Under its aegis, scientists and faculty are presenting their findings related to mosquito-borne diseases. It will help students and the community at large.”

Earlier, the university organized a poster and debate competition in the run up to the event. The winners of the competition were felicitated by Chief Guest Soumya Ranjan Patnaik, Editor Sambad.

The topic for the poster competition was ‘Malaria Control Needs Innovation to Reduce Disease Burden and Save Lives’. The first prize in the category was bagged by Rojalin Moharana of AIPH University while Sambit Biswaketan from Ravenshaw University and Akanksha Kashyap from AIPH University got the 2nd and 3rd Prize, respectively.

Similarly, the topic for debate competition was ‘Malaria Control: Chemical versus Biological’. The first prize was bagged by Sambit Biswaketan from Ravenshaw University while Debasis Ghose from SCS Autonomous College Puri, and Sidhant Dwivedy of AIPH University received the second and third prizes, respectively.

Speaking at the meeting, Dr. R K Hazra, Senior Scientist at the National Academy of Vector-borne Diseases, said, “Mosquito is the main transmitting agent for a range of diseases and thereby, a major Public Health hazard. “Study of mosquito is an important aspect of Public Health,” he added.

Dr. Hazra who is also a former scientist at the Regional Medical Research Centre, Bhubaneswar, said Public Health calls for receipt of early information and quick management of the disease situation. He said in post-Covid times there has been a concerted focus to control vector-borne diseases. Efforts are being made to assess the impact of mosquito density on diseases like Zika and Japanese Encephalitis which are slowly raising their heads.