Akshay, Sara and Dhanush team up for Aanand L Rai’s next 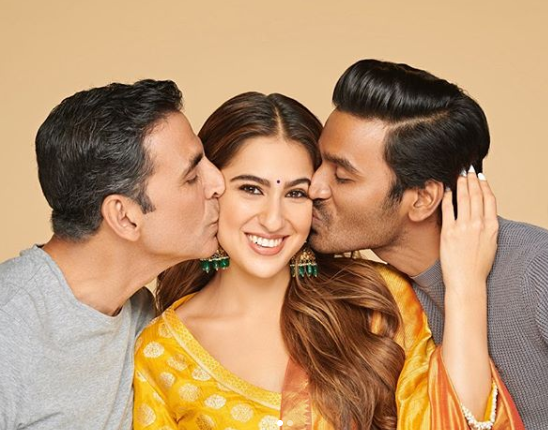 Bhubaneswar: Here’s great news for fans of Akshay Kumar, Sara Ali Khan and south Indian actor Dhanush as the trio will be teaming up for a movie soon.

Earlier in 2019, Dhanush had confirmed that he will be working with Director Aanand L Rai for a film. Soon after that, it was reported that Bollywood’s heartthrob Hrithik Roshan and Sara Ali khan  will be a part of the movie.

Now, there are reports in Bollywood that Akshay Kumar will be sharing screen space with  Sara Ali Khan and Dhanush in filmmaker Aanand L Rai’s next ‘Atrangi Re’.

Talking about ‘Atrangi Re’, Akshay in a statement to Bombay Times said,” I am thrilled to be working with Aanand L Rai, as I have always admired the way he has showcased his stories. When he narrated the film to me, I said yes within 10 minutes. It is a challenging character to play, but at the same time, it is such a special role that my heart just couldn’t say no to it. I will remember it for the rest of my life. My combination with Sara and Dhanush truly makes it true to its title- Atrangi! And I know that Aanand, in his special and simple way of storytelling, will only add magic to it. As I said, my heart just couldn’t let this one go.”

It will be interesting to see these stars on the big screen together. In the meantime, it will be also challenging to justify their characters.

“It takes a secure actor like Akshay to do such a role . He has been pushing the envelope and is always up for challenges. He also spoke about Dhanush and Sara pairing, Both of them are quite interesting and exciting. Fans will love the freshness these two will bring on the big screen,” said Director Aanand.

Produced under the banners of Bhushan Kumar’s T-Series, Aanand’s  Color Yellow productions and Akshay’s Cape of Good Films, ‘Atrangi Re’  will go on floors in March 2020.

Villagers perform puja in Odisha’s Ganjam for safety of commuters