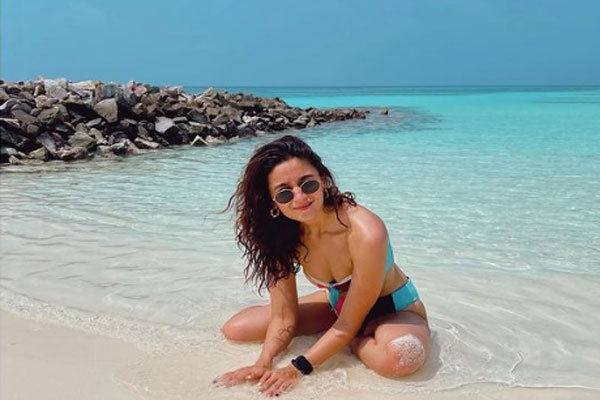 Male:  Bollywood actress Alia Bhatt set the internet on fire on Sunday morning with beautiful photographs of herself in a bikini posing on a beach here in the Maldives.

Sharing her sun-kissed photo from the beach where she flaunts a colourful bikini and sunglasses, Alia wrote on Instagram: “Blue seas and a pisces.”

Alia has also posted a selfie clicked together with Akansha on her Instagram story which she captioned: “Hangies with my honey.”

During an interactive session with her fans on Instagram, Alia had recently shared that she is eager to go on a vacation but not solo.

Asked by a fan if she wanted to go on a vacation, Alia stated she is not in the mood for solo outings. “You kinda wanna leave everything and go on a solo vaca,” asked the fan. “True but not solo,” Alia replied.

She made several other admissions in the course of the session. Among these was a revelation that she was not a big fan of shopping or cooking.

On the work front, Alia’s upcoming projects include Sanjay Leela Bhansali’s Gangubai Kathiawadi, a film reportedly revolving around the life of a brothel owner and matriarch. She is also a part of S.S. Rajamouli’s RRR and Ayan Mukerji’s Brahmastra, where Alia shares screen space with rumoured beau Ranbir Kapoor and Amitabh Bachchan.

Priyanka, Katrina, Alia to team up for first time on big…