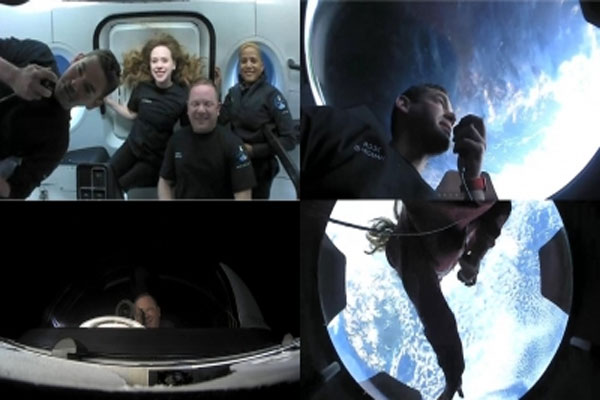 San Francisco: A day after lifting off to space, SpaceX’s Inspiration4 first all-civilian crew are healthy, happy and doing well in orbit, the company has said.

The mission lifted off at 8.02 p.m. EDT on Wednesday (5.30 am India time Thursday) aboard SpaceX’s Falcon 9 rocket and Dragon spacecraft from historic Launch Complex 39 at NASA’s Kennedy Space Center in Florida.

“The crew of #Inspiration4 had an incredible first day in space! They’ve completed more than 15 orbits around planet Earth since liftoff and made full use of the Dragon cupola,” Inspiration4 shared in a tweet.

SpaceX noted that the crew rested comfortably. But before going to bed, they travelled 5.5 times around Earth, completed their first round of scientific research, and even enjoyed a couple of meals.

“After the crew wakes up today, they will conduct additional research and get their first look out of Dragon’s cupola!

“Dragon continues to remain in its intended target orbit, with altitudes as high as 590km above the Earth’s surface, a California-based company shared on Twitter.

“Congratulations to @ElonMusk and the @SpaceX team on their successful Inspiration4 launch last night. Another step towards a future where space is accessible to all of us,” Bezos tweeted. Musk, in reply, thanked him.

In July, Bezos successfully completed the first-ever upiloted suborbital flight to space. Bezos flew beyond the Karman line — 100 kms above the ground and the internationally recognised boundary of space — on board his company Blue Origin’s fully automated and reusable New Shepard rocket.

The Inspiration4 crew also answered questions from patients of St Jude Children’s Research Hospital in Tennessee, US, from space.

“We can confirm that St Jude patients got to speak with the crew live this afternoon, asking the questions we all want to know like “are there cows on the moon?” the hospital shared on the microblogging platform.

Inspiration4’s goal is to inspire humanity and raise money for St. Jude.

The three-day mission will target approximately a 575 km orbit, flying farther from Earth than any human spaceflight since the Hubble Space Telescope repair missions.

Upon conclusion of the three-day journey, Dragon and the Inspiration4 crew will re-enter Earth’s atmosphere for soft water landing off the coast of Florida.

Elon Musk to send 1st all-civilian mission to space this…