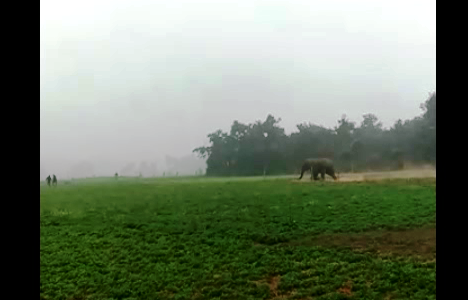 Jajpur: Collector Ranjan Das today declared closure of all schools in Korei block of the district in view of  safety of children as a herd of wild elephants is wreaking havoc in the region for the last couple of days.

All primary and high schools in Korei block, including the Vyasanagar Municipality have remained shut today.

“After getting confirmation from the District Education Officer (DEO) this morning, we suspended the classes today. A herd of elephants has strayed into Korei block and the pachyderms are roaming in the human habitation since last couple of days. Three persons have reportedly been killed in elephant attack during the last three days.  For the safety of school kids, the Collector directed for closure of all schools in the block today,” said Siddharth Patnaik, Principal of Kendriya Vidyalaya, Vyasanagar.

Yesterday, two persons of Godipatana and Radhapatana villages were trampled to death by a jumbo. Meanwhile, forest officials have launched an operation to drive away the pachyderms, sources said.