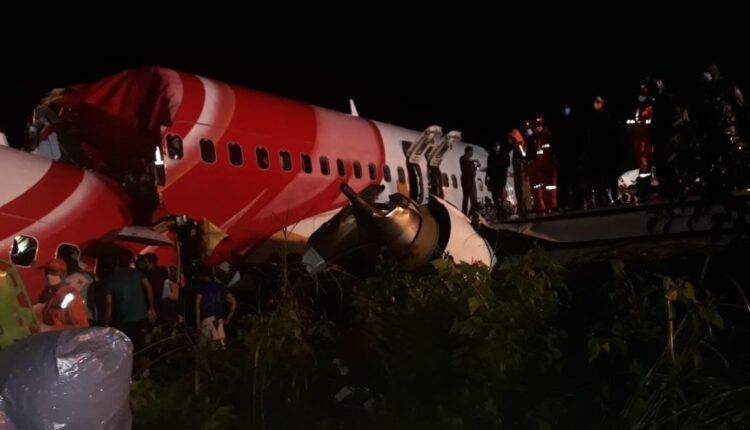 New Delhi: Air India Express accident in Kozhikode on Friday might seem similar to another such tragedy in Mangalore, 10-years-ago, however, industry insiders cite vast technical differences between the two.

In 2010, a Boeing 737 aircraft of Air India Express operating an incoming flight to Mangalore had overshot the runway while landing at the ‘table-top’ airport.

The pilots of that doomed aircraft tried to power-up the plane in an attempt to take-off before running out of tarmac.

Unfortunately, the aircraft plunged into a valley below and exploded.

Almost similar scenes were witnessed on Friday, when a Dubai-Kozhikode flight overshot the runway and fell down a slope.

Fortunately enough, the aviation turbine fuel this time did not ignite.

According to experts, some of whom are serving commanders in reputed domestic airlines, Friday’s incident has little resemblance to the one that occurred in Mangalore.

“In Mangalore, pilots had landed the aircraft in the middle of the runway. Then they quickly tried to take-off again, thereby using thrust and power,” a senior commander told IANS from Mumbai.

“However, their attempt failed and at the peak power, the aircraft hit antennas at the end of the runway and dived into the valley.”

He pointed out that Mangalore incident was an ‘high intensity’ one which ignited the on-board fuel, thereby, causing a heavy toll on life.

Only a handful of survivors had escaped the Mangalore accident.

A senior aviation safety professional, who headed the training department of a leading low cost carrier, told IANS, that the speed of impact in Kozhikode incident seems to be slower than that of the one in Mangalore.

“Only an investigation can bring out the entire fact and the story behind today’s incident, however, on the face of it, pilots seem to have tried to slow down the aircraft (in Kozhikode),” the aviator told IANS in New Delhi.

“The impact of the crash would have been more contained. Plus, commercial airliners use aluminium and light metals which can not withstand these kinds of impacts.”

Even the fact that the aircraft in Mangalore accident plunged way more deeper than the Kozhikode one is another technical factor that experts cite.

In Friday’s incident, the aircraft fell down a 35 feet slope.

“No matter, how different these accidents might be, the loss of life and property is a tragic site,” the commander said.

On Friday, one of the worst air disasters in Kerala took place, as an Air India Express flight returning from Dubai under the ‘Vande Bharat’ mission skidded off the runaway at the ‘table top’ airport in Kozhikode, leaving at least 17 people dead, including the pilots Captain D.V. Sathe and co-pilot Akhilesh Kumar.

Expressing deep anguish over the incident, Union Civil Aviation Minister Hardeep Singh Puri said a formal enquiry will be conducted into the incident by the Aircraft Accident Investigation Bureau (AAIB).

The AAIB was formed in 2012 as an independent accident probe committee under the Ministry of Civil Aviation.

Describing the incident in a tweet, the minister said the aircraft overshot the runway in rainy conditions and plunged 35 feet into a slope before breaking into two pieces.

Puri added that relief teams from the Air India and the Airport Authority of India (AAI) have been rushed to the accident spot from Delhi and Mumbai.

On Friday evening, the ill-fated AI Express aircraft skidded off the runway after landing on its second attempt amid heavy rains and plunging 35 feet into the valley below.

As per the Directorate General of Civil Aviation, the Air India Express aircraft landed on Runway 10 amid visibility of 2,000 metres in heavy rain, but overshot and nosedived into the valley and broke into two pieces.

Weekend shutdown imposed in parts of this Odisha district