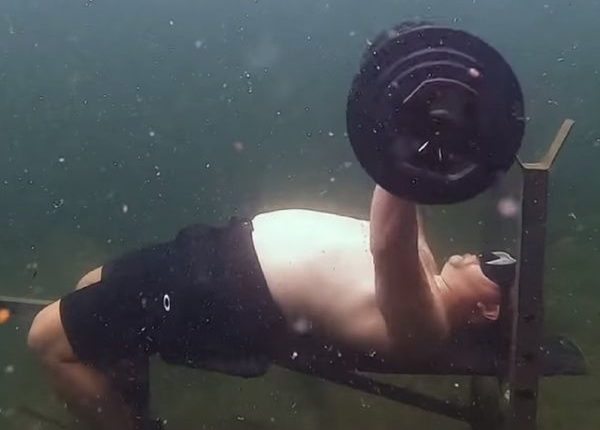 Illinois: In an ultimate show of strength, a man named as Grey Wittstock from Illinois, US recently did the highest number of consecutive bench press underwater to secure a place in the Guinness Book of World Records.

Greg Wittstock who had previously made a failed attempt, beat the previous record of 42 by doing 62 bench presses before returning to the shore. The feat was achieved in the bottom of the lake in St Charles where he held his breath for 1 minute 31 seconds and completed the task with 50kg Barbell.

A video was posted on the official account of  Guinness World Records on YouTube, where it shows Greg is heading down to the bottom of the lake with his barbell, where a bench has been already placed on the surface.

“Hey, that was so fun. I got 62 and I got full extension all the way, so no problem”, he said after emerging from the water.

Greg not only broke his previous record of 42 but also did extra 20 presses to make the task difficult for anyone who would attempt in the future.

Meanwhile, Greg also left a comment on the Guinness World Records’ video of his attempt, saying that he’s going to try to  beat his record again this August.

The video has received over 710,904 views since posted.

COVID-19 outbreak: No ‘Danda Nacha’ to be held on outskirts of Odisha capital