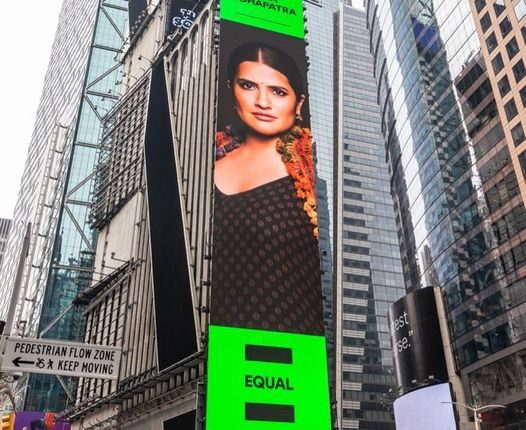 Bhubaneswar: Singer, music composer and lyricist Sona Mohapatra has been among handpicked artists whose huge billboard was put up at the Times Square in New York City. Last night, Spotify displayed a billboard featuring the Odisha-born singer, Mohapatra as a face of the ‘EQUAL’ campaign launched by the streaming platform.

Overjoyed Mohapatra in a social media post said, “Happy to toot my own horn by saying that yes, I’m possibly the rare if not first independent artist to be here on my own hustle with some incredible allies.”

This happened!!
To be on a Times Square, #NYC billboard is a #popculture milestone for an artist. To be the face of a message for a more EQUAL world an honour. For an indep. artist, almost impossible. Thank you for the belief, #India , @spotifyindia @spotify @RamSampathLive 🧚🏿‍♀️🔴 pic.twitter.com/a9awKwZzAj

Few days back Mohapatra’s ‘Ekdin’ music video was released. It has been appreciated by most audiences.

In her social media post, she also informed her film ‘Shut Up Sona’ will be released in OTT platforms soon.

Google Maps to provide info on crowded travel in 100 countries