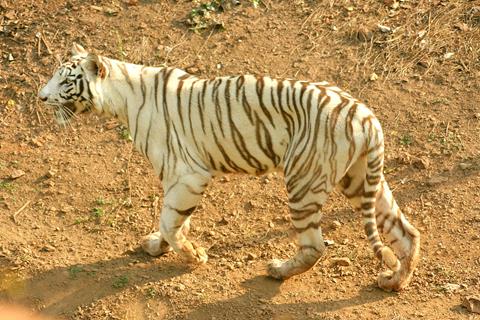 Bhubaneswar: At a time when there is a massive controversy over relocation of Royal Bengal tigress ‘Sundari’ from Satkosia Tiger Reserve, the wildlife lovers of Odisha have a reason to rejoice. White tigress ‘Vijaya’ at Nandankanan Zoological Park (NZP) here gave birth to two cubs today.

With these cubs (one white and one normal – sex not yet identified) the population of tiger at the zoo increased to 26, an official said.

Informing this to the media, NZP Deputy Director Jayant Kuamr Das said the tigress delivered the first cub at around 7.50 am and the second one at 8 am in an enclosure of the Nandanakanan Zoological Park, the official said.

Vijaya had mated with normal coloured tiger ‘Roshan’ during June this year.

Of the 26 tigers in the zoo, eight were white (a pigmentation variant of the Bengal tiger), 14 common Royal Bengal tigers and two are Black Panthers, Das informed.