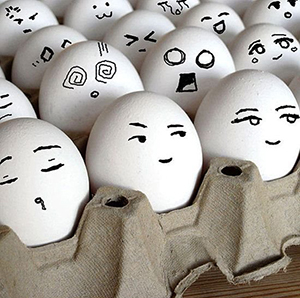 Imagine a world without edible eggs. As in, the poultry population would go on laying eggs but they would not be available for consumption or for any customary usage by human beings.

The worst-hit would be the keepers of home-made beauty remedies. I remember my hostel days when Sundays meant preparing a concoction of egg and honey. Girls would apply it on their crowning glory, put shower caps and stroll about the hostel corridors.

The fast food business would take a major hit. The house of roll and chowmein would collapse as chicken would be left a widow(er). No more double egg-chicken roll, egg paratha, egg biryani, mixed or egg chowmein. Say bye-bye to all the finger-licking deliciousness of the white wonder with chicken. Bakeries would bear the brunt of it too. The innocent egg vendors and peddlers on bicycles in Shaheed Nagar, Rasulgarh, Nayapalli and all other chhaks and junctions in the Odisha would have nothing to sell. Opolfed (Odisha State Poultry Products Co-Operative Marketing Federation Ltd.) would incur losses and so would other proprietors of the poultry products.

The feathered poultry population would increase at a geometric progression given that an average hen lays 250-300 eggs a year. And hens are not the only ones who lay edible eggs: ducks, quails, emus, ostriches and geese do too. Who knows what will happen if the hen-and-rooster dynasty comes to power and rules the two-legged creatures? Pecking order (as described by Thorleif Schjelderup-Ebbe) would be the order of the day. And what do we do when bird flu breaks out? Where will we find the space to bury the piling death toll?

Furthermore, vegetarians would rule the roast. Agreed, that chicken would be available. But mothers in kitchens all over the world would have a reason to celebrate. They would not pay heed to any egg cravings and pile the lunch/dinner table with all possible green leaf-like stuff in the name of health and well-being.

The hunger toll of single men and women, students in hostels and residents in messes/ PGs would also rise. Egg is the one-stop solution to all hunger pangs (earlier it used to be Maggie). Without fuss and easy to make, the egg menu is not short – egg bhurji, egg masala, egg pakoda, omelette, sunny side up, poached, boiled eggs, etc.

Bangalore has a small restaurant known as the ‘Egg Factory’ that has a complete ‘egg-only’ menu. Plus, nothing is better than a simple bread-masala omelette breakfast on a lazy Sunday morning. In an eggless world, the above options would simply cease to exist and stomachs would consistently growl indicating displeasure.

Moreover, what would the Egyptian hang in their temples to ensure a bountiful river flood? Christians will have no vibrant eggs or their famed egg dance for Easter celebrations. The workers of the egg carton industry would also be rendered jobless.

In an egg-shell, an eggless world is a dialectical theory to the egalitarian concept of the society.

Sex with Caitlyn on plane, ‘most embarrassing’ for Kris Jenner